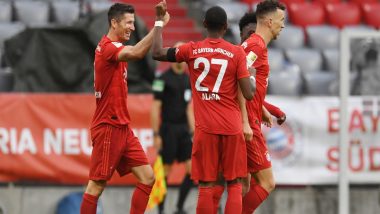 Barcelona vs Napoli Live Streaming Online: Bayern Munich have one foot in the quarter-finals of this seasons’ UEFA Champions League and will be eager to dismantle Chelsea once again when the two sides meet in Munich tonight. German champions Bayern Munich with three away goals have no reasons to fear Chelsea at the moment with the kind of football they are playing. Touted as one of the favourites for the title, it will be a real catastrophe for them to be knocked out. Frank Lampard’s Chelsea have had a decent season with a top 4 finish and a FA Cup final. They will consider the Bayern Munich game as a part of the learning curve. BAY vs CHE Dream11 Prediction, UEFA Champions League 2019–20: Tips to Pick Best Team for Bayern Munich vs Chelsea Football Match.

Pedro, skipper Caesar Azpilicueta and Christian Pulisic suffered serious injuries for Chelsea in the FA Cup final and will not travel with the squad to Germany. Olivier Giroud as the target man up front has a lot riding on his shoulders. He will have Mason Mount and Callum Hudson-Odoi for the company in the final third. N’Golo Kante’s fitness woes mean Ross Barkley could a game in where he will partner Mateo Kovacic in midfield. The defence can be a bit of concern for Chelsea with Kurt Zouma and Antonio Rudiger not in the best of forms.

Thomas Muller, Robert Lewandowski and Thomas Muller all start for Bayern Munich as Hansi Flick looks to play a strong eleven. Ivan Perisic should start in place of Kingsley Coman, who has been troubled by a muscular problem off late. Joshua Kimmich is set to be deployed as a full-back once again with Benjamin Pavard injured.

Bayern Munich vs Chelsea match in UEFA Champions League 2019-20 will take place on August 09, 2020 (Saturday midnight). The match will be played at the Allianz Arena and the game has a scheduled start time of 12:30 am IST (Indian Standard Time).

Live-action of Bayern Munich vs Chelsea match will be available on Sony Sports channels. Sony Pictures Sports Network is the official broadcaster for UEFA Champions League 2019-20 in India. Fans can tune into Sony Ten channels and live telecast the second leg of the round of 16 match on their television sets.

Fans can also follow live action on online platforms. SonyLiv, the online media of Sony Sports Network, will be live streaming the Bayern Munich vs Chelsea match online for its fans in India. Chelsea will find it tough coping against a technically superior outfit like Bayern Munich and loss of key players to injuries certainly does not help. Expect Bayern Munich to romp through to another victory.

(The above story first appeared on LatestLY on Aug 08, 2020 08:23 PM IST. For more news and updates on politics, world, sports, entertainment and lifestyle, log on to our website latestly.com).