Manchester City need a win after their defeat to PSG in their last match but they would have put forth a good performance if they have to go past Club Brugge, who have emerged as one of the dark horses in Group A. 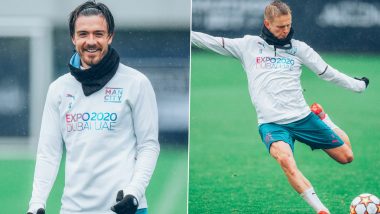 Manchester City would aim a return to winning ways when they take on Club Brugge in the UEFA Champions League 2021-22 on Tuesday. The match would be played at the Jan Breydel Stadium in Belgium and has a start time of 10:30 pm IST (Indian Standard Time). Manchester City did not put up a good show against PSG in their last Champions League fixture and as a result, they would be under pressure to prove their mettle when they face the Belgian club in an away game. What's worse is that they would be without the services of top defender John Stones as he hasn't travelled with the squad to Belgium owing to personal reasons. Pep Guardiola would have the Brazilian duo of Gabriel Jesus and Ederson returning, and both should automatically get into the playing XI.Cristiano Ronaldo Forced By Ole Gunnar Solskjaer to Clap For Travelling Manchester United Fans After 4-2 Loss Against Leicester City in EPL 2021-22: Reports

Club Brugge on the other hand, have had a good time in the Champions League, turning out to the dark horses in a group that has heavyweight sides like PSG and Manchester City, along with RB Leipzig. Midfielder Hans Vanaken has performed well for the Belgian side and they would once again be a threat to deal with for Guardiola and his side, who would be keen on proving a point and potentially, reinstating their status as a favourite in the tournament.

Club Brugge vs Manchester City clash in UEFA Champions League 2021-22 will be played at Jan Breydel Stadium in Brugge on October 19, 2021 (Tuesday). The game has a scheduled time of 10:15 pm IST (Indian Standard Time).

Sony Pictures Network are the official broadcasters of UEFA Champions League 2021-22 in India and will telecast the games live on its channels. Fans can tune into Sony Sports HD/SD channels to watch the live telecast of Club Brugge vs Manchester City, on TV.

Sony Pictures Network’s official OTT platform Sony Liv will be streaming the game live for its fans in India. You can tune into the Sony Liv app or website to watch Club Brugge vs Manchester City, UEFA Champions League 2021-22 live streaming online. JioTV would also provide live streaming for this match.

(The above story first appeared on LatestLY on Oct 19, 2021 03:36 PM IST. For more news and updates on politics, world, sports, entertainment and lifestyle, log on to our website latestly.com).