Liverpool vs Real Madrid final clash in UEFA Champions League 2021-22 will be played at the Stade de France in Paris on May 29, 2022 (Sunday). The game has a scheduled time of 12:30 am IST (Indian Standard Time). 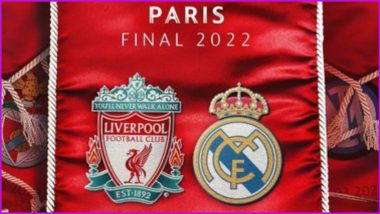 The European club football season ends with the finals of the UEFA Champions League, where two iconic clubs – Liverpool and Real Madrid – battle it out for the right to be called champions of the continent. Liverpool, who narrowly missed out on winning the EPL and already have two trophies in the bag, have been in fine form since the turn of the year. Opponents Real Madrid won the Spanish La Liga without any challenge and have made some astonishing comebacks in the previous rounds of the Champions League this campaign. In terms of the brand of football and presence of world class performers, both these teams are neck and neck and it will take a moment of brilliance to decide the finals. UEFA Champions League 2021-22 Final: Real Madrid’s Belief Is Fear Factor for Liverpool in Paris.

Fabinho returns for Liverpool after missing the last few games owing to injury and his presence in midfield gives the team a real push. He will have Thiago Alcantara and Jordan Henderson for company while Mo Salah and Virgil Van Dijk return as well in the starting eleven. Sadio Mane has been in great goalscoring touch this season and should start as the number nine with January signing Luis Diaz providing width.

David Alaba should return to the starting eleven for Real Madrid after missing the last six games due to an injury. Federico Valverde is likely to get the nod on the right-wing which is a surprise for many. Rodrygo Goes is an excellent option from the bench if the going gets tough while talismanic striker Karim Benzema will keep the Real Madrid defenders on their toes. Fans Excited Ahead of Liverpool vs Real Madrid UCL 2021-22 Final, See Trending Tweets.

Liverpool vs Real Madrid final clash in UEFA Champions League 2021-22 will be played at the Stade de France in Paris on May 29, 2022 (Sunday). The game has a scheduled time of 12:30 am IST (Indian Standard Time).

Sony Pictures Network are the official broadcasters of UEFA Champions League 2021-22 in India and will telecast the UCL final live on its channels. Fans can tune into Sony TEN 2, Sony TEN 3 and Sony TEN 4 HD/SD channels to watch the live telecast of Liverpool vs Real Madrid on TV.

Sony Pictures Network’s official OTT platform Sony LIV will be streaming the game live for its fans in India. You can tune into the Sony Liv app or website to watch Liverpool vs Real Madrid UCL final live streaming online. JioTV would also provide live streaming. Liverpool in Cup Competitions this season have always found a way to win and this game will be no different with the Reds claiming the top honors.

(The above story first appeared on LatestLY on May 28, 2022 04:10 PM IST. For more news and updates on politics, world, sports, entertainment and lifestyle, log on to our website latestly.com).