The Costa Rica vs Germany FIFA World Cup 2022 match will be played at the Khalifa International Stadium. The game will be held on December 01, 2022 (Thursday) and is scheduled to begin at 00:30 am IST (Indian Standard Time). 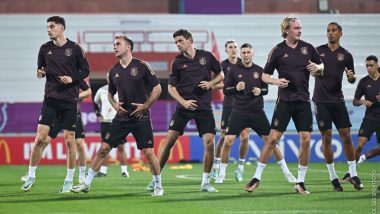 Germany are the only side in Group E without a win and it is a miracle that they are still in with a chance of making it to the top 16 given how poor they have been. A surprise loss against Japan was followed by an equally tepid showing versus Spain where they scored in the 83rd minute to tie the contest. It was more about Spain missing their chances than Germany gaining a point. Manager Hansi Flick’s future as the German football boss could be in jeopardy should Die Mannschaft fail to make the cut this evening. Opponents Costa Rica started their World Cup campaign with a 7-0 loss against Spain but then surprised everyone by beating Japan in their second match. FIFA World Cup 2022 Group E Points Table Updated Live: Spain Consolidate Top Spot With 1–1 Draw Against Germany.

Francisco Calvo will miss the clash for Costa Rica owing to suspension and will be replaced in the starting eleven by Juan Pablo Vargas. Jewison Bennette was dropped against Japan but is in line to start against Germany. Contreras will lead the attack for Costa Rica but is not likely to see much possession.

Niclas Fullkrug scored the all-important goal for Germany versus Spain and he is set to be rewarded with another start. Thomas Muller enjoys playing as a second striker with Leroy Sane and Jamal Musiala on the wings. Serge Gnabry is set to be on the bench for the Germans but could be vital as an impact substitute in the second half. FIFA World Cup 2022 Schedule for Free PDF Download Online: Get Football Fixtures, Time Table With Match Timings in IST and Venue Details.

The Costa Rica vs Germany FIFA World Cup 2022 match will be played at the Khalifa International Stadium. The game will be held on December 01, 2022 (Thursday) and is scheduled to begin at 00:30 am IST (Indian Standard Time).

Where to Get Live Telecast of Costa Rica vs Germany, FIFA World Cup 2022 Match?

Sports 18 network holds the live broadcast rights of Football World Cup 2022 in India, So, fans in India can watch Costa Rica vs Germany (CRC vs GER), FIFA World Cup 2022 match live on Sports 18 in English commentary. For Hindi commentary fans will have to tune into MTV and Sports 18 Khel.

How to Get Free Live Streaming of Costa Rica vs Germany, FIFA World Cup 2022 Match?

With Sports 18 holding the broadcast rights, the live streaming online of FIFA World Cup will be available on Jio Cinema mobile app and website. Fans can watch the live streaming of the Costa Rica vs Germany (CRC vs GER), FIFA World Cup 2022 match on Jio Cinema for absolutely free. Live commentary of the match is available in English, Hindi, Malayalam, Bengali and Tamil. Germany beat Costa Rica 4-2 at the 2006 World Cup and though the times have changed for German football, they still have the capability to create a similar score line this evening.

(The above story first appeared on LatestLY on Dec 01, 2022 04:45 PM IST. For more news and updates on politics, world, sports, entertainment and lifestyle, log on to our website latestly.com).