The Portugal star had annoyingly removed two Coca-Cola bottles placed in front of him during a press conference ahead of his side's Euro 2020 opener against Hungary. He had encouraged everyone to drink water, shouting 'Agua' in Portuguese. 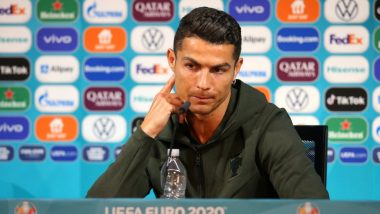 Cristiano Ronaldo had removed two Coca-Cola bottles and encouraged people to drink water instead, on Tuesday during a press conference, an incident which has made quite an impact. The Portugal star, who is one of the fittest athletes in world football appeared to be annoyed with the Coca-Cola bottles and put them aside, a gesture that has hit the beverage brand with a 1.6% drop in stock prices. Coca-Cola thus reportedly suffered a loss of USD 4 billion and their worth fell from USD 242 billion to USD 238 billion. Coca-Cola, for that matter, is an official sponsor of Euro 2020. Cristiano Ronaldo Reacts After Shattering a List of Records During Hungary vs Portugal in Euro 2020

On the field, Ronaldo stole the show for Portugal once again as his side began their Euro title defense in style, defeating Hungary 3-0 in a Group F encounter at the Ferenc Puskas. The match was goalless for a significant amount of time and three late goals, including a brace from Ronaldo, was enough for Portugal to walk out with a dominating victory.

The Portugal star now is the highest scorer with 11 goals, surpassing French legend Michel Platini's tally of nine. Portugal would next face Germany on 19 June at the Allianz Arena.

(The above story first appeared on LatestLY on Jun 16, 2021 12:13 PM IST. For more news and updates on politics, world, sports, entertainment and lifestyle, log on to our website latestly.com).