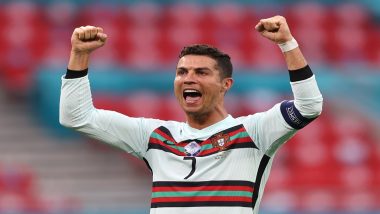 With a brace last night against Hungary, Cristiano Ronaldo has broken several records. Not only did he become the highest goal-scorer of all-time at Euros, but also he became the top goal scorer for his country Portugal. The five-time Ballon d'Or winner scored a brace last night against Hungary at the Puskas Stadium and led Portugal to a 3-0 win. Post this, Ronaldo took to social media and reacted after shattering several records. In the post, he said, that wins are not easy and one needs to fight till the end. He also lauded the team for their win against Hungary. Cristiano Ronaldo Becomes All-Time Top Scorer at Euros With a Brace Against Hungary (Watch Goal Highlights).

Team Portugal is placed in Group F along with the giants like Germany and France. Their Group is labelled as the 'Group of Death' as it brings along a tough challenge right at the start of the tournament. With the brace, Ronaldo also broke a list of records for himself last night. The netizens could not stop praising Ronaldo for his performance and labelled him as the GOAT! His name even at this moment continues to trend on social media.

Now, let's have a look at the tweet by Ronaldo and then the records:

# With 106 goals, Ronaldo also emerged as the all-time top scorer for Portugal.

With this Portugal now stands on number one on the Euro 2020 Group F points table. Portugal will next take on France in the Group stage of the Euro 2020.

(The above story first appeared on LatestLY on Jun 16, 2021 10:50 AM IST. For more news and updates on politics, world, sports, entertainment and lifestyle, log on to our website latestly.com).