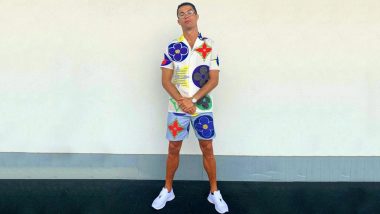 Cristiano Ronaldo’s sense of style is always adored by fans all over the world. Just like his game, Ronaldo has an impeccable sense of style but here's one occasion that the star footballer was trolled by his own teammates for his sense of dressing. Now, after Juventus went on to beat Lecce 4-0, CR7 posed for a picture in a colourful outfit where he was seen donning a matching shirt and shorts combo. He had posed for a snap ahead of the weekend and wrote, "Starting the weekend with a good vibe and a good style," as the caption of the snap. Cristiano Ronaldo Poses in a Colourful Attire Following Juventus' 4–0 Victory Against Leece in Serie A 2019–20 (See Instagram Post).

Little did CR7 know that his own teammates would end up pulling his leg. Leonardo Bonucci commented three facepalm emojis with the caption,"Unbelievable!!!" Whereas Defender Medhi Benatia, who left Italy for Qatar side Al-Duhail went on to say, "Come and bro... good style I dont know." Let's have a look at the comments below: 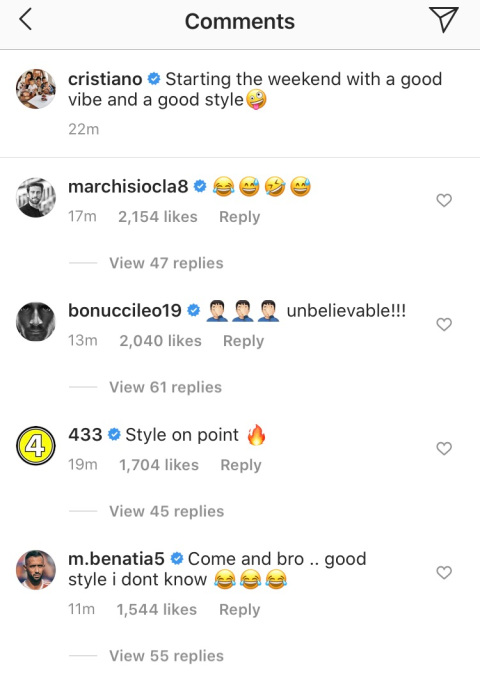 Here's a look at the pictures for which CR7 was trolled.

Starting the weekend with a good vibe and a good style🤪

After a stunning 4-0 win against Lecce, CR7 and his girlfriend whisked off to an undisclosed destination in their private yacht. Georgina was seen and sunbathing with his boyfriend and even went on to share a few pictures of the trip on social media. Talking about the game, at the 62nd minute of the match, CR7 converted a penalty into a goal. Even Juventus manager Maurizo Sarri praised the star footballer and said that Ronaldo is an important asset to the team. Juventus will be next hosted by Genoa on July 1, 2020, where once again the Bianconeri will look forward to extending their lead on the Serie A 2019-20 points table.

(The above story first appeared on LatestLY on Jun 29, 2020 08:51 AM IST. For more news and updates on politics, world, sports, entertainment and lifestyle, log on to our website latestly.com).