The Croatia vs Belgium FIFA World Cup 2022 match will be played at the Ahmad bin Ali Stadium. The game will be held on December 01, 2022 (Thursday) and is scheduled to begin at 08:30 pm IST (Indian Standard Time). 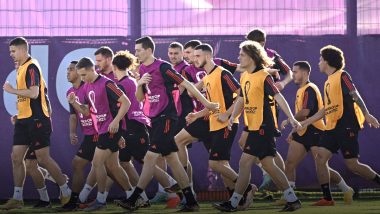 Belgium find themselves in a spot of bother at the 2022 FIFA World Cup following their defeat at the hands of Morocco on matchday 2. They next face Croatia at the Ahmed bin Ali Stadium where a win or draw for Croatia sees them through to the next round. The Red Devils start the day third in Group F which means only a win helps avoid an early exit. The performance of the team has been below par and it is cause of concern for manager Roberto Martinez. Despite having a plethora of stars in their rank, the team has played some ordinary football, particularly in the last match. Croatia started with a draw against Morocco but defeated Canada in style. The 2018 finalists can be a handful for any team if they play to their potential. FIFA World Cup 2022 Schedule for Free PDF Download Online: Get Football Fixtures, Time Table With Match Timings in IST and Venue Details.

Andrej Kramaric scored two goals against Canada and his confidence will be high following the brace. He will play a key role today in the attacking third alongside Ivan Perisic and Marko Livaja. Luka Modric, Marcelo Brozovic and Mateo Kovacic are some of Europe’s elite midfielders and they can wrestle control of the game from Belgium easily. Jasko Gvardiol has been one of the best young players in Qatar and Belgium will find it tough to find a way past him in the backline.

Romelu Lukaku will start for Belgium which is a massive boost for the side considering how crucial he has been for the national side for the past few years. Kevin de Bruyne and Eden Hazard have been woeful, and it will be interesting to see if they get another opportunity in the starting eleven. Axel Witsel will sit deep and protect the back three allowing Youri Tielemans to venture forward. FIFA World Cup 2022 Group F Points Table Updated Live: Croatia Jump to Top Spot, Morocco Second After Stunning Win Over Belgium.

The Croatia vs Belgium FIFA World Cup 2022 match will be played at the Ahmad bin Ali Stadium. The game will be held on December 01, 2022 (Thursday) and is scheduled to begin at 08:30 pm IST (Indian Standard Time).

Where to Get Live Telecast of Croatia vs Belgium, FIFA World Cup 2022 Match?

Sports 18 network holds the live broadcast rights of Football World Cup 2022 in India, So, fans in India can watch Croatia vs Belgium (CRO vs BEL), FIFA World Cup 2022 match live on Sports 18 in English commentary. For Hindi commentary fans will have to tune into MTV and Sports 18 Khel.

How to Get Free Live Streaming of Croatia vs Belgium, FIFA World Cup 2022 Match?

With Sports 18 holding the broadcast rights, the live streaming online of FIFA World Cup will be available on Jio Cinema mobile app and website. Fans can watch the live streaming of the Croatia vs Belgium (CRO vs BEL), FIFA World Cup 2022 match on Jio Cinema for absolutely free. Live commentary of the match is available in English, Hindi, Malayalam, Bengali and Tamil. Belgium will be under pressure from the onset and that might just hinder their performance and lead to them crashing out.

(The above story first appeared on LatestLY on Dec 01, 2022 12:57 PM IST. For more news and updates on politics, world, sports, entertainment and lifestyle, log on to our website latestly.com).