Croatia vs Portugal Live Streaming Online: Croatia have had a poor 2020 with wins difficult to come by and the team’s play in general being average to say the least. They face Portugal in the last game of round robin stage of the Nations League where their top-flight status is on the line. 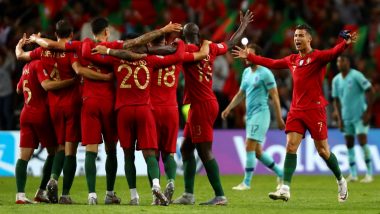 Croatia vs Portugal Live Streaming Online: Croatia have had a poor 2020 with wins difficult to come by and the team’s play in general being average to say the least. They face Portugal in the last game of round robin stage of the Nations League where their top-flight status is on the line. Having won just 2 out of the 7 played this year and a 4-1 thumping received at the hands of the same opposition in their last meet, Croatia have to perform well above their levels to secure a win. For Portugal, their defeat at the hands of France in the last game means they are set to finish second irrespective of the result tonight. Cristiano Ronaldo Reacts to Portugal’s Exit From UEFA Nations League 2020–21 After Defeat to France, Urges Teammates to ‘Hold Heads High and Be Proud of Everything Achieved’.

Domagoj Vida is in quarantine after testing positive for the coronavirus and he joins Marcelo Brozovic on the sidelines. The return of Dejan Lovren after suspension gives a huge boost to the Croatian defence and should slot in straight into the playing eleven. Luka Modric and Mateo Kovacic in the middle have a lot of work to do in order to stop the Portuguese domination in the final third. Ivan Perisic is a threat for the hosts with his pace and crosses and should create a few chances for striker Ante Budimir.

Nelson Semedo and Mario Rui look set to start for Portugal with Fernando Santos set to play a much changed line up. Joao Moutinho has found game time difficult to come by in Portuguese colours and the Wolve man will be eager to stamp his authority on the game. Paulinho had a good game last week and is all set to lead the visitor’s attack. Cristiano Ronaldo could be rested while Manchester United’s Bruno Fernandes starts. Sergio Ramos Despite Missing Two Penalties in Switzerland vs Spain Drawn UEFA Nations League 2020-21 Match Gets Coach Luis Enrique’s Backing.

When Is Croatia vs Portugal Match Scheduled to Take Place? Date, Time and Venue of 2020/21 UEFA Nations Game

Croatia vs Portugal UEFA Nations League Group C match will take place on November 18 (Tuesday mid-night). The match will be played at the Poljud Stadium and it has a scheduled start time of 01:15 am IST (Indian Standard Time).

Fans can also follow the match live online. SonyLiv, the OTT of Sony Network, will be live streaming Croatia vs Portugal match online for fans in India. So fans can tune into the SonyLiv app or on the SonyLiv website to catch the live-action. Croatia are winless in their last six games against Portugal but tonight they just might secure a positive result against the 2016 Euro champions.

(The above story first appeared on LatestLY on Nov 17, 2020 01:58 PM IST. For more news and updates on politics, world, sports, entertainment and lifestyle, log on to our website latestly.com).