Croatia vs Scotland, UEFA Euro 2020 Live Streaming Online & Match Time in IST: How to Get Live Telecast of CRO vs SCO on TV & Free Football Score Updates in India

Both teams are facing goalscoring issues, finding the net just once each in the two games that they have played. This being a must-win game, both Croatia and Scotland would want their strikers to come up with good performances. 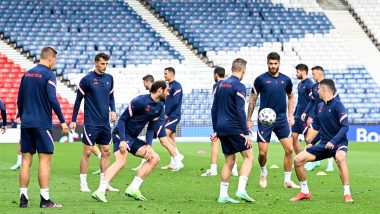 With qualification to the last-16 round up for grabs, Croatia would be locking horns with Scotland in a Group D clash on Wednesday, June 23. The match is scheduled to take place at 12:30 AM IST (Indian Standard Time) and is to place at Hampden Park in Glasgow. Placed third and fourth in the group respectively, with just one point in their kitty, this match is a must-win for both Croatia and Scotland. Scotland had suffered a 0-2 loss in their first match against Czech Republic but they came up with a gritty performance against title favourites England in the next game, holding Gareth Southgate's men to a goalless draw. With a -2 goal difference, one can argue that they are at a slight disadvantage in the points table in case teams are locked on similar points. Euro 2020 Day 12 Schedule: Today's Matches With Kick-Off Time in IST, Upcoming Fixtures and Updated Points Table

Croatia, much like Scotland, started with a loss coming against the Englishmen in their first match and managed a 1-1 draw against toppers Czech Republic. One common problem that has plagued both these teams is the fact that they have found goals very hard to come by. Both have scored just one goal so far in two games and this game being an absolute must-win, they would want their attackers to fire full throttle. The focus would indeed be on how the 2018 World Cup finalists stage a comeback after an underwhelming tournament so far.

When is Croatia vs Scotland, UEFA EURO 2020 Match? Date, Time and Venue Details

Croatia vs Scotland Euro 2020 match will be played on June 23, 2021 (Wednesday) at the Krestovsky Stadium, commonly known as the Hampden Park in Glasgow. The match is scheduled to start at 12:30 am IST (Indian Standard Time).

Sony Pictures Networks India is the official broadcaster of UEFA EURO 2020 in India. It will broadcast Croatia vs Scotland, live match on Sony Ten 2 in English, Sony Ten 3 in Hindi, Sony Ten 4 in Tamil and Telugu, Sony Six in Bengali and Malayalam.

(The above story first appeared on LatestLY on Jun 22, 2021 03:46 PM IST. For more news and updates on politics, world, sports, entertainment and lifestyle, log on to our website latestly.com).