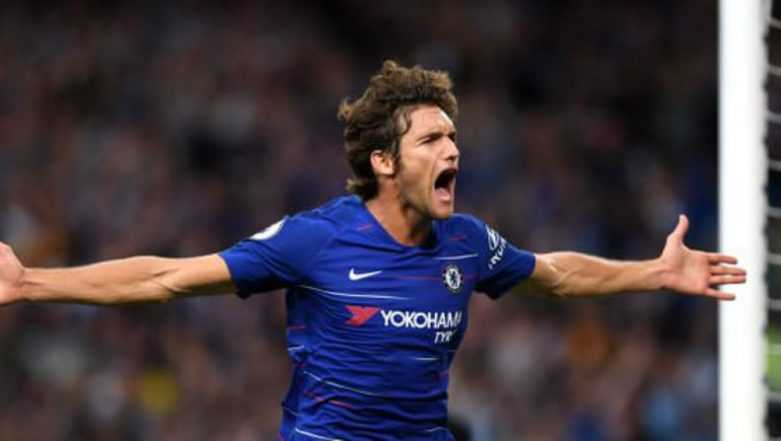 Chelsea have had issues with consistency throughout the season and are away in the first leg of their Europa League semi-final with German side Eintracht Frankfurt. Maurizio Sarri got a positive result at Old Trafford last weekend and could end up at the fourth position in the league if they win their remaining domestic games. But with a chance to win a European prize, the Italian man will want his team to remain focused against quality opposition. Having lifted the DFB Pokal last week, Eintracht have what it takes to get a win against the Londoners. Lionel Messi Brace Leads Barca to 3–0 Win Over Reds in Champions League Semifinal.

Frankfurt are without a number of important players for the game with Sebastian Haller, Timothy Chandler and Taleb Tawatha all ruled out. Adi Huttler will also have to manage without the services of star forward Ante Rebic who is suspended. Luka Jovic and Goncalo Paciencia in attack carry a threat and if they receive the proper supply from the likes of Sebastian Rode, things could tricky for the Blues. Mijat Gacinovic is fit again and will line-up behind the two strikers to be the chief playmaker of the side. Porto Goalkeeper Iker Casillas Suffers Heart Attack, Out of Danger.

Defender Antonio Rudiger suffered a knee injury against Manchester United which ended his season but Brazilian Willian is available after recovering from a horror tackle by Marcos Rojo. Olivier Giroud is the first choice forward for Sarri when it comes to the Europa League and the Frenchman will line-up alongside Eden Hazard and Pedro. Ruben Loftus-Cheek is also likely to be involved in place of Mateo Kovacic who had a poor game at Old Trafford. Jorginho and N’Golo Kante are the first name on the team sheet be it any game and the duo hold the key for the Blues in Germany tonight.

With Sony Sports Network as the official broadcaster, their digital platform Sony Liv will be providing the free video streaming. You can catch Eintracht Frankfurt vs Chelsea , UEFA Europa League with free live streaming online on Sony Liv.

Chelsea have a good record against German opposition and they should hold Eintracht to a draw at home. A scored draw will mean advantage Chelsea going into the return leg at Stamford Bridge.