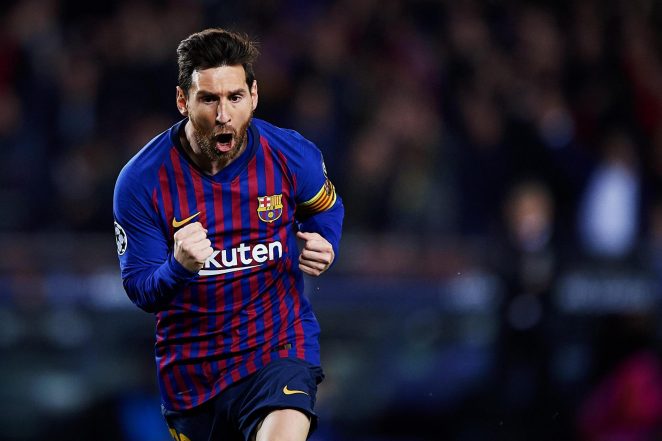 Barcelona, May 2: Lionel Messi had a brace here Wednesday as FC Barcelona inflicted a 3-0 defeat on Liverpool in the first leg of their Champions League semifinal tie. The Reds were better than the score showed, but will need some magic next week at Anfield to give themselves a chance at victory in Europe's elite club competition a year after losing in the final to Real Madrid. BAR 3 - LIV 0 | Barcelona vs Liverpool - Live Football Score, Match 214 - Summary.

For Barça, Wednesday night's contest in front of more than 98,000 people at Camp Nou was a giant step toward reaching the final for the first time since they last hoisted the Champions League trophy in 2015.

The visitors deployed their trademark high press and the home side struggled on the attack for the opening 15 minutes until Messi dropped back toward midfield to better enable the crucial linkups.

The Argentine superstar created two chances for Philippe Coutinho, who shot directly into the hands of Liverpool keeper Alisson on the first occasion before missing the target on the second. Liverpool, who lost Naby Keïta to injury in the 24th minute, continue to surge forward, but without posing any real danger to Marc-Andre ter Stegen's goal.

Two minutes after Jordan Henderson came in for Keïta, Coutinho nudged the ball to Jordi Alba charging down the left flank. The defender's cross found Luis Suarez in the box and the Uruguay international got his first goal in Champions League play since April 4, 2018.

Wounded, the visitors continued to put pressure on the Barça defense and were poised to pull level when Henderson slipped the ball to Sadio Mane, only for the Senegalese striker to send his shot over the top of the net.

Liverpool were aggressive to start the second half and Ter Stegen had to turn aside shots from James Milner and Mo Salah. Barça responded by putting aside their usual emphasis on possession, deciding to rely instead on the direct attack, and the initiative seemed to be with the visitors until a run by Messi in the 75th minute.

Reds midfielder Fabinho confronted Messi, but his successful challenge sent the ball on a path that ended with Suarez. While the Uruguayan's volley bounced off the cross-bar, Messi pushed in the rebound to put Barcelona up 2-0. Eight minutes later, the captain put the final nail in Liverpool's coffin with a stunning free kick in the 83rd minute. A Salah strike that looked bound for the back of Ter Stegen's net hit the post, denying Barcelona the consolation of an away goal.