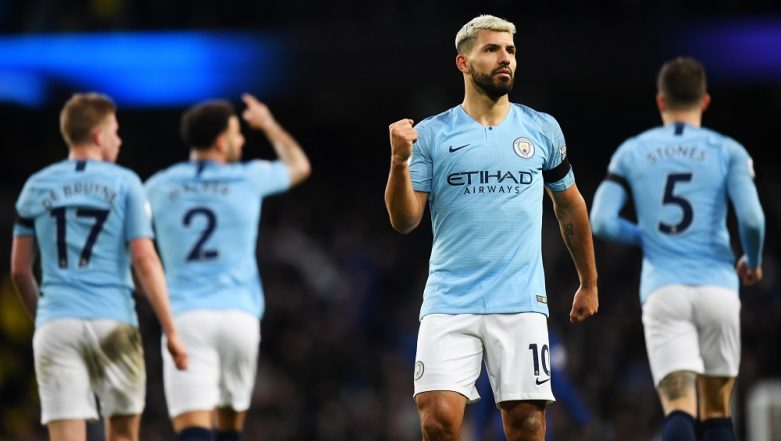 With the victory, Man City regained the EPL lead with 65 points, ahead of Liverpool, who has game in hand, on goal differential, while Chelsea fell to the sixth place in the table with 50 points, just behind Arsenal on goal differential also. Manchester City vs Chelsea, EPL 2018–19 Live Streaming Online: How to Get English Premier League Match Live Telecast on TV & Free Football Score Updates in Indian Time?

Sterling opened the scoring for Manchester City with a close-range right-footed finish just four minutes into the play following a cross by teammate Bernardo Silva who was unmarked inside the area. Aguero then fired a remarkable long-range shot for his first personal goal, making it 2-0 for the City in minute 13, assisted by Ukrainian midfielder Oleksandr Zinchenko.

After seven minutes, Aguero struck again for the 3-0 goal with a left-footed half-volley shot from inside the box that got past Chelsea goalie Kepa Arrizabalaga, following a bad clearance from Ross Barkley at the edge of the area. Gundogan secured City's first-half 4-0 lead in the 25th minute, with a right-footed shot from outside the box, sending the ball into the lower-right corner of the net.

After the intermission, Chelsea defender Cesar Azpilicueta fouled Sterling inside the area, paving the way for Aguero to seal his 11th EPL hat-trick after successfully delivering from the 12-yard spot in 56th minute, tying with Liverpool's Mohamed Salah of Egypt as EPL top scorers with 17 goals each.

Furthermore, the Argentine forward has scored as many EPL hat-tricks as record holder and former England, Newcastle United and Blackburn Rovers striker Alan Shearer. Sterling then sealed the City's 6-0 rout of Chelsea with a close-range left-footed finish, 10 minutes before second-half stoppage time, following a low cross by teammate David Silva.

Manchester City, thus, has become the first EPL side to score more than once in 15 consecutive home matches in the top English soccer league, pulling equal to Tottenham Hotspur who achieved the feat in December 1965. The start of this run dates back to the City's 3-1 win over Brighton & Hove Albion in the last home game of the 2017-2018 season on May 9, 2018.