Finland vs Belgium, UEFA Euro 2020 Live Streaming Online & Match Time in IST: How to Get Live Telecast of FIN vs BEL on TV & Free Football Score Updates in India

Belgium, already having qualified for the last-16, would use this match as a preparatory game ahead of the knockouts. For Finland, it is important that they win this match to increase their chances to qualify. 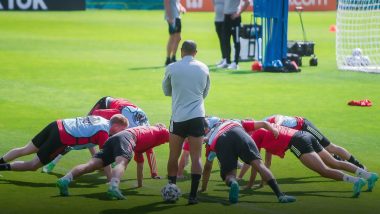 High-flying Belgium would take on spirited Finland in a Group B clash on Tuesday. The match would be played at the Krestovsky Stadium, commonly known as the Gazprom Arena in Saint Petersburg and is scheduled to start at 12:30 AM IST (Indian Standard Time). Belgium, with two wins from as many matches, have already booked a spot in the last-16. Their first victory against Russia was proof of why they are the number one ranked side in the world. But they had to dig deep to find a way to defeat Russia 1-0 in their second match. This match would help Belgium prepare for much tougher competition awaiting ahead in the knockouts. But they would find a strong force in Finland, who have sprung up a surprise in their first major tournament. They started off with a 1-0 win over Denmark, in a match where Christian Eriksen suffered a cardiac arrest and had collapsed. But they succumbed to a defeat to Russia in their next match. With a spot in the last-16 on the line, Finland would hope to come up with their best performance against one of the title favourites. Euro 2020 Day 11 Schedule: Today's Matches With Kick-Off Time in IST, Upcoming Fixtures and Updated Points Table

In terms of head-to-head statistics, Finland surprisingly hold the upper hand with four wins in the 11 total matches that they have played. Belgium have won three and the remaining four games have ended in draws.

When is Finland vs Belgium, UEFA EURO 2020 Match? Date, Time and Venue Details

Finland vs Belgium Euro 2020 match will be played on June 22, 2021 (Sunday) at the Krestovsky Stadium, commonly known as the Gazprom Arena in Saint Petersburg. The match is scheduled to start at 12:30 am IST (Indian Standard Time).

Sony Pictures Networks India is the official broadcaster of UEFA EURO 2020 in India. It will broadcast Finland vs Belgium, live match on Sony Ten 2 in English, Sony Ten 3 in Hindi, Sony Ten 4 in Tamil and Telugu, Sony Six in Bengali and Malayalam.

(The above story first appeared on LatestLY on Jun 21, 2021 06:04 PM IST. For more news and updates on politics, world, sports, entertainment and lifestyle, log on to our website latestly.com).