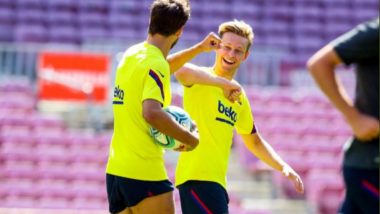 Frankie de Jong and Gerard Pique have replaced handshake with a fist bump. Yes! Gone are the days when the footballers will be seen shaking hands with each other or even will be exchanging jerseys as a mark of respect. All thanks to the coronavirus which has largely impacted our lives massively. Handshakes have been replaced with fist bumps, the football matches will not have any spectators for a few months at least on the football field. The impending season of football might have started again but after the massive outspread of the coronavirus, the La Liga has laid down a few restrictions. Barcelona Trolled by Fans for Posting a Witty Caption in Zlatan Ibrahimovic Style, Netizens Ask Catalan Giants To Delete the Tweet.

Now, check out the picture shared by Barcelona below:

The first team trains at Camp Nou, #Messi and @_nelsonsemedo_ do specific work on the training pitch. pic.twitter.com/ag6ftMyzbV

Talking about Barcelona, the team will play their first game against Mallorca on June 14, 2020, at the Camp Nou. Barcelona sits at the top of the La Liga 2019-20 points table with 58 points in its kitty.

(The above story first appeared on LatestLY on Jun 06, 2020 10:54 PM IST. For more news and updates on politics, world, sports, entertainment and lifestyle, log on to our website latestly.com).