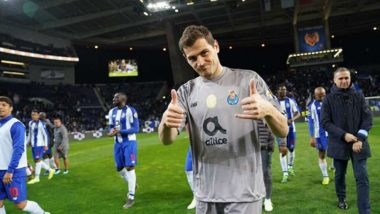 Madrid, February 12: Veteran Spanish goalkeeper Iker Casillas is keen on running for election as president of the country's football federation. Casillas is yet to call it a day playing and is at FC Porto, but did not play since suffering a heart attack in May 2019.

According to an ESPN source-based report, the 38-year-old held a meeting with Spanish sport's governing body Consejo Superior de Deportes in Madrid recently and told them that his idea is to stand in the forthcoming elections, expected in autumn this year. Casillas only returned to training for the first time since suffering a heart attack, last November. Iker Casillas Hospitalised After Suffering a Heart Attack, Footballers Pray For Former Real Madrid Goalkeeper.

The goalkeeper led Spain to the World Cup title in 2010. Casillas has made 725 appearances in 16 years for Spanish giants Real Madrid before leaving for Portuguese giants Porto in 2015.

(The above story first appeared on LatestLY on Feb 12, 2020 10:53 PM IST. For more news and updates on politics, world, sports, entertainment and lifestyle, log on to our website latestly.com).