Juventus vs Cagliari, Serie A 2020-21 Free Live Streaming Online & Match Time in IST: How to Get Live Telecast of JUV vs CAG on TV & Football Score Updates

Juventus vs Cagliari match in Serie A 2020-21 will be played at the Juventus Stadium. The match will take place on November 22, 2020 (Saturday mid-night) and is scheduled to start at 01:15 am IST (Indian Standard Time). 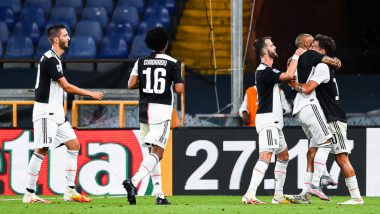 Juventus vs Cagliari, Serie A 2019-20 Live Telecast and Free Live Streaming Online: Defending champions Juventus are in a transition phase at the moment with string of victories difficult to come by. Andre Pirlo’s brand of football has been admired by fans but they remain a work under progress under the Italian legend. Next up for the Bianconeri is home game against Cagliari which looks an easy one, at least on the paper. AC Milan have a 4 point lead over Juventus at the moment but they do not have the experience to push on in the title race which Juventus have in plenty. Opponents Cagliari are 11th in the points table and they will be eager to break into the top half of the table with a positive result at the Allianz Arena. Villarreal vs Real Madrid, La Liga 2020-21, Free Live Streaming Online & Match Time in IST: How to Get Live Telecast on TV & Football Score Updates in India?

The big news coming in from the Juventus camp is Leonardo Bonucci has picked up an injury on international duty and now is set to miss a month of football. Matthijs de Light and Merih Demiral should form the central defensive partnership. Up front, in form strikers Cristiano Ronaldo and Alvaro Morata look set to be a menace for Cagliari, aided by Paulo Dybala who plays in the playmaker role. Rodrigo Bentancur is an important member in the Andrea Pirlo setup as he makes the team tick.

Joao Pedro and Giovanni Simeone have both registered 5 goals each so far and Juventus will do well to keep the duo quiet. Apart from them, Cagliari also have a talented midfielder in Marko Rog whose work rate is exceptional. Diego Godin misses out for the visitors after testing positive for the coronavirus.

Juventus should work on keeping their composure at the back which will in turn enable them to bag the three points comfortably.

When is Juventus vs Cagliari, Serie A 2020-21 Football Match Schedule (Date, Time and Venue Details)?

Juventus vs Cagliari match in Serie A 2020-21 will be played at the Juventus Stadium. The match will take place on November 22, 2020 (Saturday mid-night) and is scheduled to start at 01:15 am IST (Indian Standard Time).

How to Live Telecast of Juventus vs Cagliari, Serie A 2020-21 Football Match?

Where to Get Free Live Streaming Online of Juventus vs Cagliari, Serie A 2020-21 Football Match?

Juventus vs Cagliari match will also be available on online platforms. SonyLiv, the OTT of Sony Network, will be live streaming the Serie A 2020-21 clash for its online fans in India.

(The above story first appeared on LatestLY on Nov 21, 2020 02:31 PM IST. For more news and updates on politics, world, sports, entertainment and lifestyle, log on to our website latestly.com).