An Alvaro Morata double ensured Juventus a 4-1 win when both these met earlier this month in the reverse fixture. Since then Juventus has drawn against Lazio and beaten Cagliari 2-0 with Ronaldo finding the net in both matches. He has continued where he had left two weeks ago after returning to action post his recovery from COVID-19. 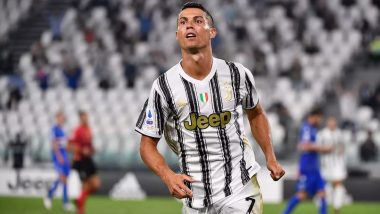 Juventus will want to confirm their place in UEFA Champions League 2020-21 round of 16 stage when they host Ferencvaros in their fourth Group G match on Tuesday. Juventus are second in Group G and can seal their place in UCL knockouts with a win over bottom-paced Ferencvaros, who have just one point after three rounds. Cristiano Ronaldo’s return after two weeks have coincided with regular wins for Andrea Pirlo’s side and he will hope his team can put aside the Hungarian opponents and confirm their place in the knockouts with two games to spare. Meanwhile, take a look at the predicted line-up for Juventus vs Ferencvaros Group G match. Cristiano Ronaldo Shares Picture With Paulo Dybala and Others From Juventus Training Ahead of UEFA Champions League Match Against Ferencvaros (See Pic).

An Alvaro Morata double ensured Juventus a 4-1 win when both these teams met earlier this month in the reverse fixture. Since then Juventus has drawn against Lazio and beaten Cagliari 2-0 with Ronaldo finding the net in both the games. The five-time Ballon d’Or winner has continued where he had left two weeks ago after returning to action post his recovery from COVID-19. In the four games that he has played, Ronaldo has scored five goals. He is, however, yet to score one in the Champions League this season.

Ronaldo played his first UCL match this term against Ferencvaros but failed to find the net. Coach Pirlo will hope his talismanic forward can break the drought in this fixture with Juventus depleted by injuries. They were already without their first-choice centre-back pair Leonardo Bonucci and Giorgio Chiellini due to injuries and the club dealt with another blow hours before the game after Merih Demiral was ruled out for at least a week due to a muscle injury.

That has left Matthijs de Ligt as the only recognised centre-back in the squad. The Netherlands international himself returned from injury against Cagliari in Juventus’ last game. The club is also missing Aaron Ramsey while Paulo Dybala is doubtful for a start. Take a look at the predicted starting line-up (playing XI) of both Juventus and Ferencvaros for the clash.

With only one recognised centre-back available to Pirolo, Juventus might play with a 3-4-3 formation with Alex Sando and Danilo partnering De Ligt at the back and Federico Chiesa, Alvaro Morata and Cristiano Ronaldo sharing the burden in the attack.

(The above story first appeared on LatestLY on Nov 24, 2020 10:57 PM IST. For more news and updates on politics, world, sports, entertainment and lifestyle, log on to our website latestly.com).