Lionel Messi To Play Alongside Cristiano Ronaldo Next Year at Juventus? Fans go Berserk with the Recent Transfer Rumour 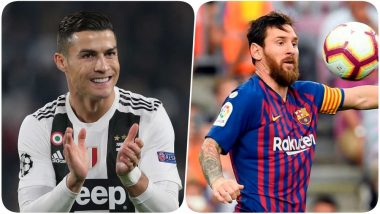 A shocking report emerged yesterday, which claimed that Lionel Messi has withdrawn talks with Barcelona for his contract renewal as he is fed up with the management of the Catalan Giants. Messi who is generally very shy and does not speak much has been vocal of late about his dislikes at the recent incidents at the club. No sooner the report went viral on social media, the football teams got busy drafting strategies for getting the world-class striker on board. It was reported that Juventus was the second most favourite to buy the six-time Ballon d'Or winner. Lionel Messi Transfer Rumours: Cristiano Ronaldo’s Juventus Second Favourite to Sign the Argentine.

No sooner the news broke out, the fans started dreaming of the two world-class strikers sharing the same dressing room and taking on the opponents together. The fans took to social media to express their excitement about the piece of news and a few of them even edited Lionel Messi's picture wherein he was seen donning the Juventus jersey. Now let's have a look at the tweets by the fans below:

I’d love to see Messi & Ronaldo on the same team, but that racist Serie A league doesn’t deserve either of them......

If I say 'Cool. So you're team Messi or team Ronaldo?', am I misogynistic?

Scenes when Ronaldo and Messi start playing together🤣 pic.twitter.com/MxOQ0a5gOh

Messi & Ronaldo together stop it. Who will dare to play against them.

Manchester City is also in the line for getting the six-time Ballon D'or Award winner on board. Lionel Messi was recently in the news for scoring his 700th career goal.

(The above story first appeared on LatestLY on Jul 04, 2020 12:08 PM IST. For more news and updates on politics, world, sports, entertainment and lifestyle, log on to our website latestly.com).