Liverpool vs Osasuna pre-season match will be played at Anfield in Manchester on August 09, 2021 (Monday). The game is scheduled to begin at 11:30 pm IST (Indian Standard Time). 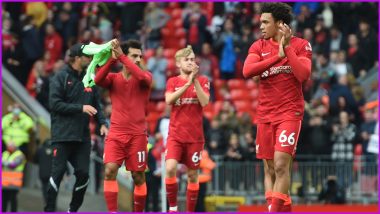 Liverpool play their second club friendly in as many days with Spanish side Osasuna in action at Anfield. The Reds managed a 1-1 draw against Athletic Bilbao yesterday which had more emphasis on player building their match sharpness rather than the result itself. It has been a quiet tranfer window for Liverpool so far with Jurgen Klopp not feeling the need to splash the money just yet. With several key players returning from injury after missing majority of last campaign, it does feel like they are a new addition itself. Opponents Osasuna defeated Real Sociedad 3-1 in their previous practice game which must have given them a lot of confidence. Lionel Messi in Paris? PSG Fans Turn Out in Huge Numbers to 'Welcome' Argentine Footballer at Le Bourget Airport (Watch Video).

Andrew Robertson suffered an ankle injury against Bilbao and that has left the fans worried with just a week left for the start of the season. The Scottish skipper limped off the pitch yesterday and is highly unlikely to face Norwich. Jordan Henderson and Thiago Alcantara have both trained with the first team and expected to play some part against Osasuna. Another positive news for the Reds fans is key defender Virgil Van Dijk looked close to his usual best in the 71 minutes he played against Bilbao.

Jon Moncayola was part of the Spain’s Olympics squad and hence will join Osasuna’s squad late. Cote and Iker Benito are struggling with injuries at the moment and will miss their team’s opening few games. Ante Budimir will lead the attack for the Spanish side and his duel with Virgil Van Dijk will be interesting to watch.

Liverpool vs Osasuna pre-season match will be played at Anfield in Manchester on August 09, 2021 (Monday). The game is scheduled to begin at 11:30 pm IST (Indian Standard Time).

Where to Get Live Telecast of Liverpool vs Osasuna, Club Friendly Football Match?

Fans will not be able to watch the Liverpool vs Osasuna friendly match on any TV channel as there are no official broadcasters of the game.

How to Get Free Live Streaming of Liverpool vs Osasuna, Club Friendly Football Match?

Fans can catch the Liverpool vs Osasuna, friendly match action on online platforms. Fans can tune into LFC TV and LFCTV GO to watch the live streaming but need to buy a subscription first. Liverpool will feel confident they can play their brand of expansive fast paced football against Osasuna. Jurgen Klopp might field a completely new team in the second half though with the Premier League opener just a week away.

(The above story first appeared on LatestLY on Aug 09, 2021 07:08 PM IST. For more news and updates on politics, world, sports, entertainment and lifestyle, log on to our website latestly.com).