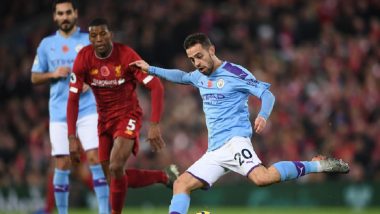 Manchester City vs Liverpool, Premier League 2019-20 Free Live Streaming Online: Manchester City will give a guard of honour when English champions Liverpool come visit the Etihad. The game has lost much of its title significance with a mix of magnificent reds and poor City performances wrapping up the title much before expectation. Pep Guardiola and his boys will want to win though to make a statement highlighting their intent for next season. For Liverpool though, their time has truly come under the management of Jurgen Klopp. With trophies coming thick and fast, the Reds have the potential for sustained success. Manchester City versus Liverpool will be telecasted on Star Sports network and streamed live on Hotstar from 12:45 AM IST. MCI vs LIV Dream11 Prediction in Premier League 2019–20.

Sergio Aguero and Fernandinho remained sidelined for Manchester City owing to fitness and disciplinary issues. Nicolas Otamendi and Aymeric Laporte should be the two centre-backs for the home side with Kyle Walker and Benjamin Mendy coming into the team as the full-backs. Kevin de Bruyne is the playmaker in this City squad and has Gabriel Jesus to feed upfront. Raheem Sterling and Bernardo Silva have pace and intelligence on the ball that could stretch the Liverpool defence. Rodri plays as the sweeper for Manchester City with his primary role being to track the front three of the opposition. Manchester City Will Give Liverpool ‘Guard of Honour’ During Premier League Clash, Says Pep Guardiola.

Jurgen Klopp will be in no mood to give his young players a chance to break into the starting eleven yet with the likes of Mo Salah, Sadio Mane and Roberto Firmino all starting. Fabinho is the one that provides the impetus in midfield with skipper Jordan Henderson playing the supporting anchorman role. Virgil Van Dijk partners Joe Gomez in defence with Joel Matip ruled out for the rest of the season.

The Premier League clash between Manchester City and Liverpool will be played at the Etihad Stadium on July 3, 2020 (Friday). The game has a scheduled time of 12:45 am IST.

How to Get Free Live Streaming Online of Manchester City vs Liverpool, Premier League 2019-20 Football Match?

Premier League 2019-20 can be viewed in India on OTT Platforms. Fans can log into Disney+ Hotstar app or Disney+ Hotstar website too catch the live streaming of Manchester City vs Liverpool clash. Manchester City have a fragile defence at the moment which could spell trouble for them in this massive battle against Liverpool. There should be goals with the away side prevailing in the end.

(The above story first appeared on LatestLY on Jul 02, 2020 03:15 PM IST. For more news and updates on politics, world, sports, entertainment and lifestyle, log on to our website latestly.com).