Manchester United have placed an €80 million (£68m/$94m) bid for Atletico Madrid midfielder Marcos Llorente. The 26-year-old has been involved in 19 goals in 36 appearances in all competitions this season, scoring 10 and assisting nine for Diego Simeone’s team. 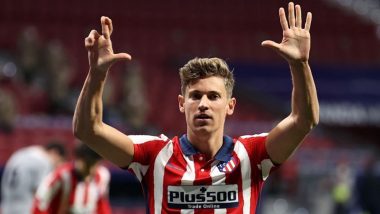 Manchester United are looking to reinforce their midfield options for next season and have identified Atletico Madrid’s Marcos Llorente as a potential target. The Spaniard has been one of the key players for Diego Simeone’s team for a couple of seasons now and is on the top of ole Gunnar Solskjar’s list as well as the Red Devils look to bolster their options in the midfield. Juventus Ready To Sell Two Stars To Land Manchester United Midfielder.

According to a report from Spanish news outlet AS, Manchester United have placed an €80 million (£68m/$94m) bid for Atletico Madrid midfielder Marcos Llorente. The 26-year-old has been involved in 19 goals in 36 appearances in all competitions this season, scoring 10 and assisting nine for Diego Simeone’s team.

As per the publication, Atletico Madrid have the midfielder in their plans for the upcoming season and have no intentions of selling him but Manchester United’s huge offer has forced them to study the transfer as the Rojiblancos look to recover some of the financial losses amid the coronavirus pandemic.

It is understood that it is up to Atletico Madrid to accept the offer and decide if they want to sell one of their star performers for the past few seasons. Manchester United are willing to double Marcos Llorente’s salary.

This report comes on the back of rumours suggesting that Paul Pogba might be on his way to Juventus. The Italian giants are reportedly looking to sell a number of their stars in order to fund the return of the French world cup winner, who is yet to agree on a new contract with Manchester United, which ends in 2022.

(The above story first appeared on LatestLY on Mar 26, 2021 11:56 PM IST. For more news and updates on politics, world, sports, entertainment and lifestyle, log on to our website latestly.com).