Manchester United have identified Mauricio Pochettino as their next manager if Ole Gunnar Solskjaer is to be sacked. However, the record English champions aren’t the only one chasing Mauricio Pochettino, as neighbours are also eyeing the Argentine for life after Pep Guardiola. 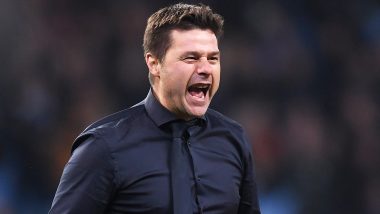 Mauricio Pochettino is a wanted man in Manchester as both the big clubs in the city are hoping to acquire the services of the Argentine manager in the near future. The former Tottenham Hotspur boss is out of a job since the North London club sacked him in November of last year. Despite not managing a club in nearly a year, the 48-year-old is still in high demand. Who Is Mauricio Pochettino? 5 Things to Know About Potential Manchester United Manager Who May Replace Ole Gunnar Solskjaer.

According to a report from Daily Star, Manchester United have identified Mauricio Pochettino as their next manager if Ole Gunnar Solskjaer is to be sacked. The Red Devils’ interest in the Argentine manager reignited following their recent humiliation at the hands of Tottenham Hotspur in the Premier League. United have also had a tough start to their season, winning just one of their opening two games in the league. Marcus Rashford, David De Gea and Harry Maguire Issue Apologies After Manchester United's 6-1 Home Defeat Against Tottenham Hotspur.

However, the record English champions aren’t the only one chasing Mauricio Pochettino, as neighbours are also eyeing the Argentine for life after Pep Guardiola. There are doubts if the Spaniard  will continue at the club once his contract ends as the team have fallen off their high levels in recent seasons.

After two back-to-back titles, Manchester City finished 18 points off Premier League champions, Liverpool last season and a 5-2 loss to Leicester and a draw against newly-promoted Leeds United this season, has raised the question of the team needing some new leadership. Pep Guardiola’s City side have failed to perform in the Champions League as well, reaching the semi-finals just once.

Mauricio Pochettino has been away from football for almost a year but has always maintained that he would like to return to the Premier League after recharging his batteries. The Argentine has managed clubs like Espanyol, Southampton and Tottenham Hotspur, taking the latter to their first-ever UCL final appearance.

(The above story first appeared on LatestLY on Oct 12, 2020 05:27 PM IST. For more news and updates on politics, world, sports, entertainment and lifestyle, log on to our website latestly.com).