Who Is Mauricio Pochettino? 5 Things to Know About Potential Manchester United Manager Who May Replace Ole Gunnar Solskjaer

Despite few more nights such as the one in Paris - victories over Manchester City and Chelsea, Solskjaer has looked out of his depth at Old Trafford. He did help United finish third in the Premier League last season and qualify for the Champions League but has done little to establish faith among fans and experts. 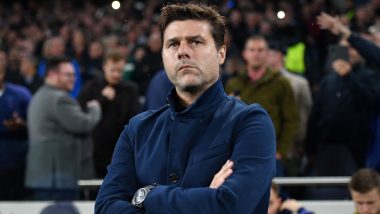 Mauricio Pochettino could soon return as a manager in the Premier League. The 48-year-old Argentine gaffer, who took Tottenham Hotspur to the UEFA Champions League final two years ago, is currently out of job after being sacked by Spurs just months after leading them to their most precious night in club history. He has already rejected approaches from Barcelona twice and was also reportedly in contention to become the Juventus manager. But Pochettino, who has also coached Espanyol and Southampton, is waiting for the right offer and nothing could be better than taking the hot seat at Old Trafford. As reports predicting Pochettino to become new Manchester United manager keeps on growing, take a look at 5 things to know about the Argentine who could replace Ole Gunnar Solskjaer. Manchester United Contact Mauricio Pochettino Over Replacing Ole Gunnar Solskjaer As the Head Coach After 6–1 Humiliation Against Tottenham Hotspur.

Solskjaer, who first arrived at Old Trafford as a caretaker manager, was appointed as a full-timer on the back of a glorious Champions League night in Paris where his United side, helped by some lousy defending, goalkeeping and enormous luck, overcame a 0-2 deficit against PSG to reach the UCL quarter-finals. Despite few more nights such as the one in Paris, victories over Manchester City and Chelsea, Solskjaer has looked out of his depth at Old Trafford. He did help United finish third in the Premier League last season and qualify for the Champions League but has done little to establish faith among fans and experts. Marcus Rashford, David De Gea and Harry Maguire Issue Apologies After Manchester United's 6-1 Home Defeat Against Tottenham Hotspur.

Under the Norwegian, United lost three successive semi-finals last season, FA Cup, League Cup and Europa League and have started this new campaign with two home defeats in three Premier League matches. It is the first time that United have lost successive home league games since 1986-87. They were lucky to win against Brighton but Tottenham exposed Solskjaer’s side and thrashed them 6-1, the club’s biggest defeat since 2011. Results, leaky defence and lack of a proper game plan have only drawn echos of the need to bring Pochettino. Take a look at five things to know about the former Spurs manager.

Reports suggest that Solskjaer’s fate as a United manager could be decided by November with his team set to play some big matches amidst a hectic schedule. Manchester United Chief executive Ed Woodward is a big admirer of Pochettino and tried signing him in 2016 but failed to reach an agreement with Tottenham chairman Daniel Levy.

Two years later, United were once again on the lookout for a manager and once again knocked on Tottenham’s door but were asked to pay a huge compensation fee. Time, however, is ripe now and Pochettino is finally available and for free.

(The above story first appeared on LatestLY on Oct 06, 2020 02:42 PM IST. For more news and updates on politics, world, sports, entertainment and lifestyle, log on to our website latestly.com).