The French midfielder has had a stellar year in 2021 where he was named Bundesliga Player of the Season. PSG and Juventus have also expressed interest in signing the youngster. 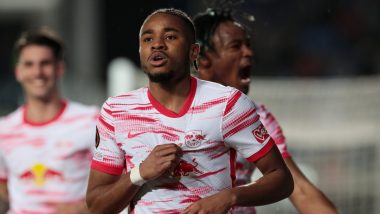 Manchester United have reportedly shown interest in signing Christopher Nkuku this summer. Nkuku had a great season for RB Leipzig and was even named Bundesliga Player of the year. A sensational performance in the German league only meant that a lot of clubs would come seeking his signature. According to a report, Manchester United are one of the clubs that are keen on securing the services of the French midfielder. Sadio Mane Transfer News: Liverpool Ace To Reveal Future After UEFA Champions League Final

Nkuku has had a great Bundesliga season where he scored a whopping tally of 30 goals and 20 assists. It is understandable why Manchester United are interested in signing the player. The Red Devils are set to face a long list of players who would quit the club in the summer and Paul Pogba is one of them too. The Red Devils need a top midfielder, someone of his caliber to fit into their system. Erik ten Hag's appointment at the club is set to usher in a new era at the club and the young Frenchman might fit the bill.

The Red Devils are also reportedly interested in signing Darwin Nunez from Benfica. With uncertainties over Anthony Martial and the departure of Edinson Cavani, United are in the lookout for a top striker to be part of their attack next season.

(The above story first appeared on LatestLY on May 27, 2022 09:56 PM IST. For more news and updates on politics, world, sports, entertainment and lifestyle, log on to our website latestly.com).