The Liverpool forward has been rumoured to be thinking of making a move elsewhere for pursuing a fresh challenge. Bayern Munich are one of the clubs that have reportedly shown interest in signing the Senegal star. 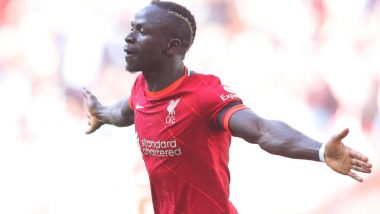 Liverpool ace Sadio Mane has said that he would reveal his future after the Champions League final. Mane has been one of the most important players for Jurgen Klopp's side and it was reported earlier that he is seeking a fresh challenge elsewhere. Quizzed on where his next destination would be, Mane revealed that he would speak about it after the Champions League while outlining his full determination to help Liverpool win the title. Mohamed Salah Transfer News: Egypt Star Confirms Anfield Stay for Next Season

“This question I will answer after Champions League (final), if I’m staying or not," Mane said, as quoted by Sky Sports. He also stated, "What I want to say now is I am fully focused on the Champions League and winning it, which is far more important for me and the Liverpool fans. That is the answer I must give before the final. But come back to me on Saturday and I will give you the best answer you want to hear, for sure. It’s special. I will give you all you want to hear then."

The forward has had a great year so far and a solid performance in the UCL final against Real Madrid can push his claim to win the Ballon d'Or award. The Senegal star earlier won the Africa Cup of Nations and also clinched the League Cup and FA Cup titles this season with Liverpool. Earlier, his teammate Mohamed Salah revealed that he would stay back at Liverpool for the upcoming season.

(The above story first appeared on LatestLY on May 27, 2022 05:29 PM IST. For more news and updates on politics, world, sports, entertainment and lifestyle, log on to our website latestly.com).