Manchester United vs Everton match in Premier League 2020-21 will be played on February 06, 2021 (Saturday). The match will be held at Old Trafford and it is scheduled to begin at 01:30 am IST (Indian Standard Time). 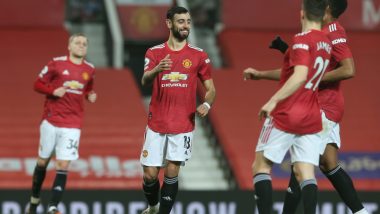 Manchester United, buoyed by the historic 9-0 hammering of Southampton in their previous game, will look to carry on with the momentum when they take on Everton at Old Trafford. The Red Devils have been brilliant this season in the league but Manchester City’s exceptional run of form at the moment means they may well have to content themselves with a second place finish. But with the English Premier League being so unpredictable, the hosts will look to keep the gap at the top of the league to as narrow as possible. Opponents Everton are seventh in the points table and Champions League qualification is a priority for them this campaign. A positive result at Ole Trafford will help them leapfrog Chelsea and West Ham United. Manchester United Tie EPL Record With Southampton Humbling: A Look at Biggest Wins in Red Devils' History.

Edinson Cavani suffered an ankle knock in the game against Southampton and had to be replaced shortly. The Uruguayan international is fit though but could be given a breather with Anthony Martial leading the attack. Paul Pogba is set to make his return to the starting eleven where he will line up alongside Fred in midfield. Mason Greenwood and Marcus Rashford provide urgency on the wings and their role will be vital against the Toffees.

Robin Olsen is set to continue in goal for Everton with Jordan Pickford injured. Brazil midfielder Alan has returned to first team training but it is highly unlikely he will start against the Red Devils. Alex Iwobi and Richarlison can make lives difficult for the home team’s defence particularly on the break. Dominic Calvert-Lewin in the attacking third will need those early crosses from the wide which he thrives on.

Manchester United vs Everton match in Premier League 2020-21 will be played on February 06, 2021 (Saturday). The match will be held at Old Trafford and it is scheduled to begin at 01:30 am IST (Indian Standard Time).

Where to Get Live Telecast of Manchester United vs Everton, Premier League 2020-21 Football Match?

How to Get Free Live Streaming of Manchester United vs Everton, Premier League 2020-21 Football Match?

Fans in India can also watch the Manchester United vs Everton match in Premier League online. Since Star Network is the official broadcaster for Premier League 2020-21 in India, fans can watch the live streaming of Chelsea vs Spurs match on Disney+Hotstar. JIO and Airtel subscribers can also watch the match live on JIO TV and Airtel XStream apps. Manchester United know Everton are a much more daunting task in comparison to Southampton and they will need to be focussed and patient to get over the line in their latest clash.

(The above story first appeared on LatestLY on Feb 06, 2021 04:34 PM IST. For more news and updates on politics, world, sports, entertainment and lifestyle, log on to our website latestly.com).