Manchester United will likely opt for a 3-5-2 formation that worked wonders against PSG. Alex Telles should start as a left wing-back after being rested against Chelsea. Anthony Martial, who is currently serving a domestic ban is available and Europe and will most likely partner Marcus Rashford in a two-man frontline.x 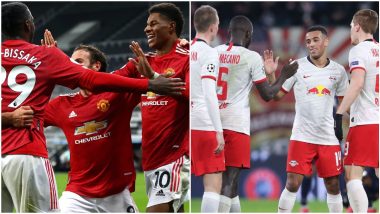 Manchester United vs RB Leipzig, UEFA Champions League 2020-21 Live Telecast and Live Streaming Online in IST: Manchester United, fresh after beating PSG in their opening UEFA Champions League group game, take on RB Leipzig at home. The Red Devils are yet to win a game at Old Trafford this season and some of it can be attributed to their lack of appetite for risk. RB Leipzig made it to the semis last season and Ole Gunnar Solskjaer is expected to display a cautious approach once again. Leipzig are top of the German Bundesliga at the moment and it will take some effort from the hosts to get over their opponents. With Arsenal in the horizon, it is the perfect opportunity for Ole Gunnar Solskjaer to rotate his squad. Paul Pogba To Retire From France National Team? Manchester United Star Brands Rumours As 'Unacceptable Fake News'.

Manchester United will likely opt for a 3-5-2 formation that worked wonders against PSG. Alex Telles should start as a left wing-back after being rested against Chelsea. Anthony Martial, who is currently serving a domestic ban is available and Europe and will most likely partner Marcus Rashford in a two-man frontline. Fred and Scott McTominay will be needed to cancel out Leipzig’s high tempo game. Bruno Fernandes in no 10 role is Manchester United’s creative genius and all the hosts depend on him to deliver the goods upfront. Manchester United Transfer News Latest Update: Sergio Romero Seeking Contract Termination After Being Left Out of Premier League 2020-21 Squad.

Nordi Mukiele, Lukas Klostermann, Konrad Laimer and Amadou Haidara are all absent for RB Leipzig after testing positive for COVID 19. Dayot Upamecano, who has been linked with a move to Manchester United in the past, is the key man in defence for the visitors. His presence adds stability to the backline and Leipzig are able to press well. Emil Forsberg in the no 10 role is known for his high work rate and he will track back and help his midfield out.

Manchester United vs RB Leipzig match in UEFA Champions League 2020-21 will take place on October 29 (Wednesday midnight). The Group H clash will be played at the Old Trafford Stadium and is scheduled to start at 01:30 am IST (Indian Standard Time).

Fans in India can catch the live action of Manchester United vs RB Leipzig match on Sony Sports channels. Sony Pictures Sports Network (SPSN) is the official broadcaster for UEFA Champions League 2020-21 in India. Fans need to tune into Sony Ten SD and HD channels to watch the match live with English commentary.

Live streaming of the Manchester United vs RB Leipzig UEFA Champions League 2020-21 Group H match will be available online on SonyLiv, OTT of Sony Network. Fans watch catch MUN vs LEP the match live on either the SonyLiv app or on the website. Tough game for Manchester United and it will take a moment of brilliance from either side to win the contest.

(The above story first appeared on LatestLY on Oct 28, 2020 03:41 PM IST. For more news and updates on politics, world, sports, entertainment and lifestyle, log on to our website latestly.com).