Mesut Ozil Will Be Put Back on Pitch When I Think He Can Give His Best: Arsenal Boss Mikel Arteta 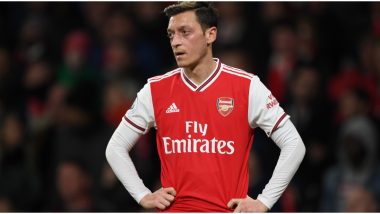 London, June 19: Arsenal boss Mikel Arteta has made it clear that he would restore Mesut Ozil in the starting line-up only when he believes the striker can rediscover his best form. Ozil was left out of the Arsenal squad for Wednesday's 0-3 defeat at Manchester City due to "tactical" reasons. "There's a lot that's happened to him in the last few weeks and I have to respect the time for every player. Sometimes they need a little bit of time," Arteta said in the virtual press conference on Thursday as per the official Arsenal website.

"It has been difficult preparation in the last two months to get players ready. "Again, I am the first one who wants Mesut at his best. I will put him on the pitch when I think he can give his best," he added. The Arsenal boss further said that he had no problems with Ozil after a "clear and honest" talk following his omission from the team. Mesut Ozil and Wife Amine Gulse Welcome Baby Daughter, Arsenal Star Thanks Almighty for Keeping Their Child Healthy (View Pic).

"He was very well with me. There were no issues at all. My conversation with Mesut is going to remain with him and me. It was a clear and honest conversation." Arsenal are ninth in the Premier League standings with 40 points from 29 matches. The head coach also exuded confidence that Arsenal can put together a strong end to the season.

"We have a lot of rocks at the moment in our way. Last night we had a few more but I am more convinced than ever. "We had something against us and that is time. In football, time is difficult to buy and patience is a little bit difficult to do. But I am convinced because I've seen it with my eyes on a daily basis, a process that takes time and time and time," he said.

(The above story first appeared on LatestLY on Jun 19, 2020 04:56 PM IST. For more news and updates on politics, world, sports, entertainment and lifestyle, log on to our website latestly.com).