Mohamed Salah Donates an Ambulance Center to His Hometown Nagrig in Egypt: Reports 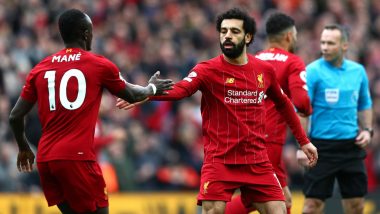 Mohamed Salah is known as the man with a golden heart. If reports are to be believed, the Liverpool forward has donated an ambulance centre to his hometown at village Nagrig, near the city of Basyoun. The coronavirus is on a rapid increase in his village. As of now, there are 69,000 cases in Egypt. In order to help his people back in his village, Salah donated an ambulance centre. Liverpool forward had already made a donation of about three million dollars to the National Cancer Institute following a terrorist attack last summer. The dreadful attack left 20 dead and 47 injured and caused substantial damage. Mohamed Salah Flaunts His Well-Chiselled Body During Liverpool Practice Session (See Pics).

Salah is known for his philanthropic activities and has often won a lot of hearts with his noble gestures.  Not very long ago did he pay for the fans at the Sainsbury’s petrol station in Liverpool. Prior to this, he even bought a piece of five-acre land in Gharbia with his father Salah Ghaly and donated it to the local authorities to build a sewage treatment plant. This was done to provide clean water to the people residing in the village. He had even paid for the construction of girls' school in Nagrig following a terrorist attack.

As of now, Salah is in Liverpool enjoying the success of the club as they have been crowned as champions for the Premier League 2019-20. The team lost their game yesterday against Manchester City by 4-0.  Coming back to the noble gesture, we are sure Salah has won a lot many hearts for the same!

(The above story first appeared on LatestLY on Jul 03, 2020 01:25 PM IST. For more news and updates on politics, world, sports, entertainment and lifestyle, log on to our website latestly.com).