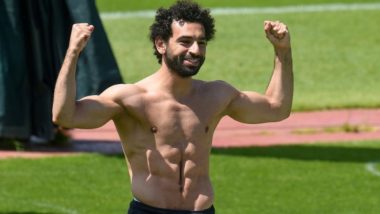 Liverpool has come back to practice and the players have been training in groups keeping in mind the norms of social distancing. The team has been practising in groups and here was the Egyptian player Mohamed Salah flaunting his body. The shirtless picture of Salah showed off his well-chiselled body and the official account of the Reds showed off the pictures of the training at the Melwood Stadium. A few days ago, the Reds had shown off the pictures of the training facilities which had kept the best interest of the players in mind. Jurgen Klopp Returns to Melwood, Liverpool Shares 'New Ways of Training' (See Pics).

Mohamed Salah, Divock Origi, Alison Becker, Jordan Henderson, Roberto Firmino, Virgil van Dijk and others were seen sweating it out in the nets. Liverpool had suspended all their playing activities since March 13, 2020, after the outspread of the coronavirus. The coronavirus had led to the suspension of all the sporting activities around the globe.

The impending season of the English Premier League will now resume from June 17, 2020. Manchester City vs Arsenal and Aston Villa vs Sheffield United will be the matches which will be played on the first day. The games are conducted behind closed doors in the absence of fans.

(The above story first appeared on LatestLY on May 29, 2020 11:21 AM IST. For more news and updates on politics, world, sports, entertainment and lifestyle, log on to our website latestly.com).