Napoli vs AC Milan, Serie A 2019-20: Dries Mertens, Zlatan Ibrahimovic and Other Players to Watch Out in NAP vs MIL Football Match

Napoli have been brilliant since football’s restart from coronavirus enforced suspension as Gennaro Gattuso’s men have won four of their last five games losing only to third-placed Atalanta. Meanwhile, AC Milan are yet to suffer a defeat post lockdown, winning four games in that time period, which also includes a victory over league leader Juventus. 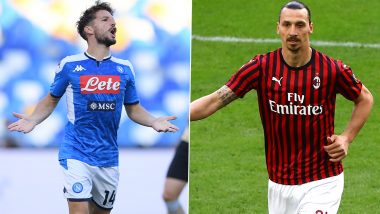 Napoli and AC Milan will take on each other in the latest Serie A fixture as the two sides resume their quest of European qualification. The game will be played at Stadio San Paolo on July 12, 2020 (late Sunday night). Just one point separates the two teams in the points table and a win tonight will boost their chances of playing in continental competitions in the upcoming season. Napoli vs AC Milan, Serie A 2019–20 Free Live Streaming Online & Match Time in Indian Time.

Napoli have been brilliant since football’s restart from coronavirus enforced suspension as Gennaro Gattuso’s men have won four of their last five games losing only to third-placed Atalanta. This run has lifted them to sixth in team standings, in contention for Europa League qualification, a target which looked unachievable after their horrific start to the season. NAP vs MIL Dream11 Prediction in Serie A 2019–20.

Meanwhile, AC Milan are yet to suffer a defeat post lockdown, winning four games in that time period, which also includes a victory over league leader Juventus. That performance will give Stefano Pioli’s men lot of confidence coming into this match and they will be hopeful of leapfrogging Napoli in the table with a win.

Both teams have world class players at their disposal so ahead of this clash, we take a look at some of the players who could have a huge impact on the final result.

The Belgian has been one of the most important players for the Napoli side this season and is one of the main reasons for their brilliant form as of late. Mertens has scored 15 goals this season and will be looking to add to that tally and take his side a step closer to Europe.

The Swede has scored in both the games since his return from injury and will be looking to extend that run to three games in arrow. His strike sparked a comeback against Juventus and manager Stefano Pioli will be expecting a similar kind of impact from his main man.

The Italian forward has been below par this season but has a habit of showing up in bag games. The 29-year-old scored the winning goal against Roma, which helped his side close gap on the fifth spot and will be looking for similar performance to pull away from Milan in race for Europa League qualification.

Along with Zlatan Ibrahimovic, the Croatian has been the most important player for Milan in their recent unbeaten run. Rebic has scored four goals in his last five games and Pioli’s men have won every game in which the 26-year-old has found the back of the net.

(The above story first appeared on LatestLY on Jul 12, 2020 09:07 PM IST. For more news and updates on politics, world, sports, entertainment and lifestyle, log on to our website latestly.com).