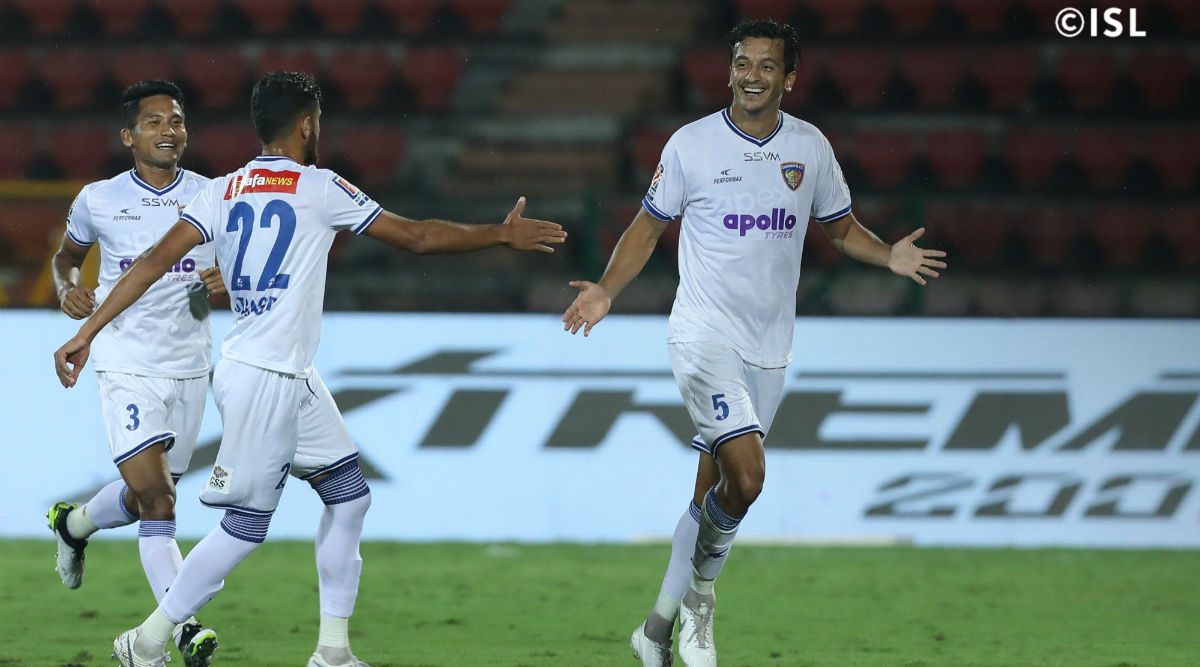 Guwahati, February 25: The league stage of the Hero Indian Super League came to an end after NorthEast United and Chennaiyin FC played out a 2-2 draw at the Indira Gandhi Athletic Stadium here on Tuesday.

Masih Saighani fired Chennaiyin into the lead (17') before two goals in either half by Martin Chaves (43', 71') seemed to have handed all three points for NorthEast United. But a late equaliser from Lallianzuala Chhangte (90+3') ensured the away side took a point. NorthEast United FC vs Chennaiyin FC, Match Summary.

NorthEast finished their season on the ninth spot with 14 points. Chennaiyin, on the other hand, finished fourth with 29 points and will now take on FC Goa in the play-offs. The other play-off will feature Bengaluru FC and ATK.

With not much riding on this game, both teams made big changes to the starting XIs with as many as 19 Indian players involved for both teams. While Masih Saighani was the only overseas player for Chennaiyin FC, Martin Chaves and Jose Leudo made up the foreign contingent for the home side.

The opening exchanges were slow and scrappy. The first chance fell for Ninthoinganba Meetei who saw his shot on goal deflected away by an alert Deepak Tangri.

In the 17th minute, Chennaiyin surged ahead after NorthEast failed to clear a throw-in into the box. Saighani reacted quickly to lash a left-footed shot on goal which could not be kept out by Sanjiban Ghosh in the NorthEast goal.

The away side tried to keep possession after going ahead and did have a few chances to double their lead. Anirudh Thapa did well to make some room to shoot inside the box but saw Leudo block it away for a corner.

A few minutes before half-time, Leudo helped NorthEast claw their way back into the game. His brilliant cross-field pass saw Meetei get ahead of Tondonba Singh and into the penalty box. The left-back was forced to bring the NorthEast attacker down and conceded a penalty. The referee also deemed the foul worthy of a red card and sent Tondonba off. Chaves duly converted the spot-kick and pulled NorthEast level.

Chennaiyin were on the backfoot after the restart. However, NorthEast lacked a bit of quality in the final third as a goal eluded them. Chaves then took matters into his own hands in the 71st minute. Nim Dorjee Tamang laid off the ball for Chaves on the edge of the box. The Uruguayan sent in a terrific volley to pull the Highlanders ahead.

However, there was a late twist in the tale as substitute Lallianzuala Chhangte scored the equaliser for Chennaiyin in injury time with a smart shot from the edge of the box.