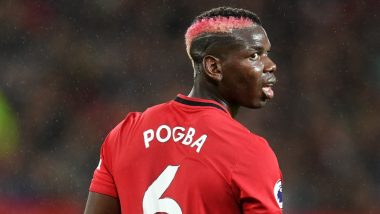 Paul Pogba winner has had a difficult time at Manchester United ever since his move to the club in 2016. The French star has struggled with injuries and has been inconsistent during his time in Manchester. But despite being a regular feature in the Premier League side’s line-up since the turn of the year, the World Cup winner still remains hopeful of signing with Juventus in the near future. Paul Pogba Tests Positive For COVID-19, Eduardo Camavinga Replaces Manchester United Player in France Squad For UEFA Nations League 2020.

According to a report from Tuttosport, Paul Pogba wants to move to Juventus, a club where he rose to fame in the footballing world. According to the publication, the 27-year-old has a contract with the Premier League side until 2022 but still hasn’t signed a new deal as he remains hopeful that the Italian side will lodge an offer for him in the future. Juventus Could Offer Paulo Dybala to Manchester United in Stunning Swap Deal.

It is understood that Juventus wanted to bring the midfielder to Turin in January of this year but the deal fell through as both the clubs couldn’t agree on a player exchange deal and Manchester United wanting a transfer fee of over 100 million euros also made it difficult for the Italian side to make a deal for the 27-year-old. Paulo Dybala was the reported player Bianconeri were offering in exchange for Paul Pogba.

Manchester United are hoping to renew the contract of their star player but no advancement has been made until now. Paul Pogba’s agent Mino Raiola recently stated ‘We are talking about renewal, but calmly, very calmly. Without stress,’ which clearly indicates that the French midfielder might look for a change of scenery.

It is understood that the reason for the delay in Pogba signing a new deal remains his desire to play for Juventus again. The 27-year-old is hopes that the Italian side, who wanted to sign him earlier in the year will also come up with a new offer, allowing him to leave the Premier League side.

(The above story first appeared on LatestLY on Sep 05, 2020 03:28 PM IST. For more news and updates on politics, world, sports, entertainment and lifestyle, log on to our website latestly.com).