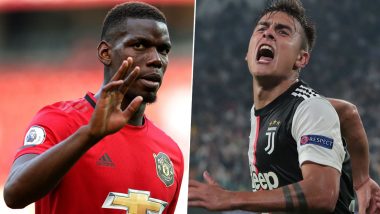 After a disappointing campaign, Juventus are looking for a fresh side under new manager Andrea Pirlo. The Bianconeri have identified Paul Pogba as their main transfer target and are working on bringing the French midfielder back to Turin. The 27-year-old has been inconsistent during his time at Manchester United but the Italian giants consider him as the player that could take the club forward in the future. Cristiano Ronaldo Transfer Latest News Update: From Barcelona to Manchester United, List of Clubs Portuguese Star Has Been Linked to Since Juventus’ UCL Elimination.

According to reports from Italy, Andrea Pirlo on Thursday had a meeting with Juventus hierarchy discussing several transfer targets and players and Paulo Dybala is being named as the key departure from the squad. As per Tuttosport, the Italian giants believe that they could convince Manchester United to let go of Paul Pogba by offering them the Argentine forward. Paulo Dybala Transfer News Latest Update: Real Madrid Prepare Stunning Player Plus Cash Deal For Juventus Star.

It is understood that Andrea Pirlo wants a proper number nine for his team and Paulo Dybala does not fit the description. Napoli striker Arkadiusz Milik, Woverhampton’s Raul Jimenez, Atalanta star Duvan Zapata and AS Roma man Edin Dzeko are the players who have been highly linked with the record Italian champions to take the centre forward role.

Paulo Dybala had a brilliant season with the Bianconeri and was awarded as Serie A’s MVP after leading Juventus to their ninth successive domestic title. This is not the first time the Argentine has been linked to a Premier League side as last year he was tipped to move to Tottenham Hotspur but the deal fell through on the deadline day.

After a turbulent couple of years, Paul Pogba is finally finding his feet at Manchester United and it is reported that the Frenchman is keen on signing a new five-year deal with the Red Devils. But the 27-year-old’s agent Mino Raiola has reportedly hinted that his departure for Italy is not unlikely. Andrea Pirlo played with Pogba from 2012 to 2015.

(The above story first appeared on LatestLY on Aug 14, 2020 04:13 PM IST. For more news and updates on politics, world, sports, entertainment and lifestyle, log on to our website latestly.com).