Marcelo and new signing Ferland Mendy are out of the game with injury leaving Zinedine Zidane short in the fullback department. Real Madrid have defeated Osasuna in 6 out of their last 8 clash which gives the edge. On current form, Madrid should win, but it will be a very close game. 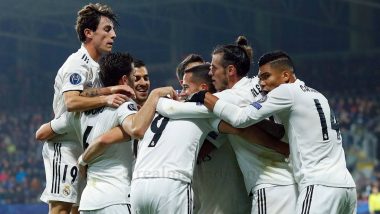 Real Madrid vs Osasuna, La Liga 2019 Free Live Streaming Online & Match Time in IST: Real Madrid will be looking to build on their win over Sevilla when newly-promoted Osasuna come visiting Santiago Bernabeu. The Los Blancos are currently third in the league, a point adrift of surprise league leaders Granada. But a win at home should see them go to the top which will be massive for Zinedine Zidane and his team early on in the season. Osasuna are unbeaten in their five-game so far and are somewhat of a draw expert. They have shared the spoils in their last four encounters and is a team difficult to break down owing to their strategies. Their 2-2 draw with Barcelona was a perfect example of their never give up spirit. Meanwhile, you can find Real Madrid vs Osasuna live streaming, free telecast and match timing details below. Gareth Bale Dropped from Real Madrid Squad to Osasuna, La Liga 2019-20.

Marcelo and new signing Ferland Mendy are out of the game with injury leaving Zinedine Zidane short in the fullback department. Nacho is the likely replacement for the two with Alvaro Odriozola taking up the left-back spot. Gareth Bale and Eden Hazard could be rested with the game against Atletico Madrid coming up. Karim Benzema has been in good goalscoring form, but Luka Jovic could replace the Frenchman while James Rodriguez is a certain starter in the No 10 role.

Skipper Oier has been ruled out of the Real Madrid game for Osasuna with defender David Garcia also missing. Adriane Hernandez and Facundo Roncaglia are the two men in charge of keeping the hosts at bay which is not an easy thing to do at Bernabeu. Osasuna will likely field a 4-4-2 formation with Chimy Avila and Brandon the two attackers. Jon Moncoyola has a tough job replicating the work rate of his missing skipper Oier in the sweeper role.

Real Madrid and Osasuna will lock horns in a La Liga match on late September 25 night (Wednesday) at 12.30 am IST (Indian Standard Time). The football game will be held at Santiago Bernabéu.

Real Madrid vs Osasuna will not be live telecast in India as there is no official broadcaster for Spanish La Liga in the Indian Subcontinent. Sony Pictures Networks had held the broadcast rights of La Liga in India previous season.

Where to Get Free Live Streaming Online of Real Madrid vs Osasuna, La Liga 2019-20 Football Match?

There is no official broadcaster of Spanish La Liga, which means there is no official app providing live streaming option on popular apps such as Hotstar or SonyLiv but one can still catch Real Madrid vs Osasuna match online via live streaming on La Liga's official Facebook page. You can also follow LatestLY for live football score updates. Real Madrid have defeated Osasuna in 6 out of their last 8 clash which gives the edge. On current form, Madrid should win, but it will be a very close game.

(The above story first appeared on LatestLY on Sep 25, 2019 10:41 PM IST. For more news and updates on politics, world, sports, entertainment and lifestyle, log on to our website latestly.com).