The Saudi Arabia vs Mexico FIFA World Cup 2022 match will be played at the Lusail Stadium. The game will be held on December 01, 2022 (Thursday) and is scheduled to begin at 00:30 am IST (Indian Standard Time). 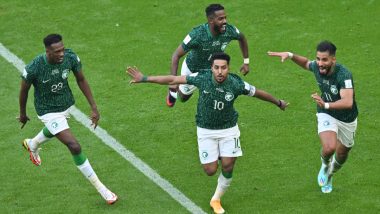 Saudi Arabia play perhaps the most important game in their history when they take on Mexico at the Lusail Stadium. A win for the Green Falcons will see them through to the round of 16 which is a massive result for them. They started the campaign with a brilliant win over Argentina but then lost to Poland, a game they dominated in large parts, but individual mistakes cost them massively. Herve Renard has coached this team brilliantly as despite not having the big stars, the team is technically strong and has the right physicality to cope up with the big teams. Opponents Mexico are the only team in the group who are yet to win a game. They need a win here and then depending on other results in the group, they will learn their fate.  FIFA World Cup 2022 Schedule for Free PDF Download Online: Get Football Fixtures, Time Table With Match Timings in IST and Venue Details.

Abdulelah Al-Malki picked up his second caution for Saudi Arabia against Poland and is now suspended for the final game. Nawaf Al-Abed will replace him in midfield and he has an important role to play this evening. Saleh Al-Shehri will be the lone man up top for the Asian side and it will be down to Salem Al-Dawsari and Firas Al-Buraikan on the wings, to get their forward involved in the match.

Andres Guardado was injured in the first half against Argentina and is likely to miss out against Saudi Arabia. Raul Jimenez is set to play as the no 9 for Mexico and he will be flanked by Hirving Lozano and Alexis Vega in the forward line. Hector Herrera is the key man in midfield for the team as he is one that makes the team tick with his slick passing range. He will sit back a bit thus freeing Luis Chavez to venture forward. FIFA World Cup 2022 Group C Points Table Updated Live: Argentina Jump to Second Place, Poland on Top After Win Over Saudi Arabia.

The Saudi Arabia vs Mexico FIFA World Cup 2022 match will be played at the Lusail Stadium. The game will be held on December 01, 2022 (Thursday) and is scheduled to begin at 00:30 am IST (Indian Standard Time).

Where to Get Live Telecast of Saudi Arabia vs Mexico, FIFA World Cup 2022 Match?

Sports 18 network holds the live broadcast rights of Football World Cup 2022 in India, So, fans in India can watch Saudi Arabia vs Mexico (KSA vs MEX), FIFA World Cup 2022 match live on Sports 18 in English commentary. For Hindi commentary fans will have to tune into MTV and Sports 18 Khel.

How to Get Free Live Streaming of Saudi Arabia vs Mexico, FIFA World Cup 2022 Match?

With Sports 18 holding the broadcast rights, the live streaming online of FIFA World Cup will be available on Jio Cinema mobile app and website. Fans can watch the live streaming of the Saudi Arabia vs Mexico (KSA vs MEX), FIFA World Cup 2022 match on Jio Cinema for absolutely free. Live commentary of the match is available in English, Hindi, Malayalam, Bengali and Tamil. The two teams will be rigid in the approach in the initial stages of the game and will opt for risks in the latter stages. The game could end in a scored draw.

(The above story first appeared on LatestLY on Nov 30, 2022 05:15 PM IST. For more news and updates on politics, world, sports, entertainment and lifestyle, log on to our website latestly.com).