This Day That Year: Lionel Messi Wore No.10 Jersey for the First Time at Barcelona 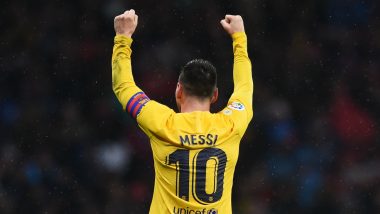 On this day (July 24), 12 years ago Lionel Messi wore Barcelona’s No. 10 jersey for the first time after inheriting it from Ronaldinho and it was the start of something really special. The iconic shirt number was passed on to the Argentine following the Brazilain’s departure from the club. This was the Messi’s third shirt with the Catalans and he had done well while previously wearing the ‘19’ and ‘30’ on his back, with the No. 10 jersey, he went on to a whole new level. Lionel Messi Broke 11 Records This Season Including Cristiano Ronaldo’s La Liga Hat-Trick Tally.

Lionel Messi was introduced as Barcelona's new No.10 to the fans during the club's pre-season game of the 2008-09 season against Scotland’s team Hibernian on this day in 2008. However, the Argentine’s genius was discovered four years prior to that when at the age of 17, he represented the Catalan side against Espanyol, for the first time in an official competition. Lionel Messi Records: A Look at All Feats Accomplished by Barcelona Star in La Liga 2019–20 Season.

When Lionel Messi was breaking through the ranks at Barcelona, there was no doubt in anyone’s mind that he will succeed Ronaldinho at the club and that is what happened. The Brazilian himself was like a mentor to the Argentine, taking the young prodigy under his wings and even providing the assist for his first senior career goal.

During Messi’s early years at the club, Ronaldinho was the main man at Barcelona but it all changed when Pep Guardiola took over from Frank Rijkaard and wanted young blood in the team. The Brazilian superstar was then sold to AC Milan and his number and even responsibilities were passed on to the little Argentine.

The move to turn Messi into a central figure at Barcelona under Guardiola paid dividend as they won 14 trophies during the manager's four-year spell in charge. But even after the Catalan’s departure, it is the Argentine who has kept the Blaugrana’s status as one of the best clubs in the world intact, despite their recent struggles.

(The above story first appeared on LatestLY on Jul 24, 2020 03:52 PM IST. For more news and updates on politics, world, sports, entertainment and lifestyle, log on to our website latestly.com).