Ollie Robinson Suspended For Controversial Tweets: A Look At Other Instances When Athletes Got In Trouble For Social Media Posts

Ollie Robinson made his Test debut for the national side last week but has been suspended from all international cricket while an outcome of disciplinary action over the controversial tweets made by him in 2012 and 2013 is still pending. 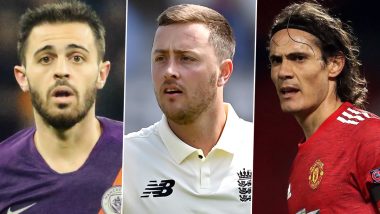 England cricketer, Ollie Robinson, became the latest in the line of athletes getting in trouble due to controversial actions on social media. The 27-year-old made his Test debut for the national side last week but has been suspended from all international cricket while an outcome of disciplinary action over the controversial tweets made by him in 2012 and 2013 is still pending. England's Ollie Robinson Suspended From All International Cricket Over Controversial Tweets.

‘England and Sussex bowler Ollie Robinson has been suspended from all international cricket pending the outcome of a disciplinary investigation following historic tweets he posted in 2012 and 2013,’ ECB said in an official statement. The 27-year-old had earlier issued an apology for the ‘racist’ and ‘sexist’ tweets made by him as a teenager.

Ollie Robinson, who impressed on his debut taking seven wickets - with 4 for 75 and 3 for 26 - and scoring 42 in England's first innings, won’t be available for selection in the second match against New Zealand due to the suspension. Many other athletes have also walked the same path so we take look back at other tweets which proved costly in the sports world.

The Manchester City star was suspended for one match and fined £50,000 for a ‘racist’ tweet about team-mate Benjamin Mendy. The FA admitted that the player did not have any ‘racist’ intentions with the tweet and it was intended to be a ‘joke between two friends.

The Manchester United star was fined £100,000 and suspended for three games after the English FA said that a word in his Instagram post could be deemed as ‘racially abusive’ by a Premier League fan. The term used by the Uruguayan was to show his appreciation to a friend in his native language. Along with the ban and fine, Cavani also had to complete a ‘face-to-face’ education program.

The record Olympic medal-winning swimmer, Michael Phelps, was given a three-month suspension by USA Swimming after a picture of him taking a hit out of a bong was posted on social media. The swimmer also lost his Kellog’s sponsorship over that incident.

The Greek triple jumper was sent home from the 2012 London Olympics after making posts on Twitter mocking immigrants from African countries. An announcement from the Greek Olympic Committee condemned the comment as ‘contrary to the values ​​and ideals of the Olympic movement.'

(The above story first appeared on LatestLY on Jun 07, 2021 11:12 AM IST. For more news and updates on politics, world, sports, entertainment and lifestyle, log on to our website latestly.com).