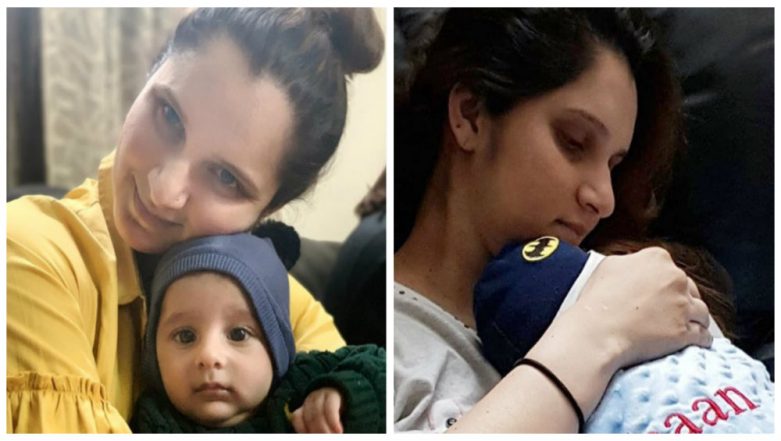 Indian Tennis star Sania Mirza, in an adorable post, shared a picture with her son Izhaan on Instagram. Sania has often shared pictures of herself with Izhaan, showing the doting mother she is and how she has embraced motherhood. Sania Mirza Celebrates Makar Sankranti 2019 by Flying Kites; Enjoys Family Time With Baby Izhaan (See Pics).

In the recent picture shared, Sania is seen with her special boy, who seems to be a natural poser and has a liking for the camera. And if you think that it's just we who think that way, then you have got to read the caption given by Sania herself to the picture. Sania Mirza Thanks Almighty for Baby Izhaan; Wishes to Have a Sound Sleep Like Hubby Shoaib Malik in 2019!

Ps- he loves the camera and tv 🙄 we just watched baba @realshoaibmalik winnnn 💪🏽 #izhaanmirzamalik #allhamdulillah," captioned Sania with the picture.

See the lovely picture of Sania with her son Izhaan in the post below:

Sania also wrote in her post that "we just watched baba @realshoaibmalik winninn" as the Pakistan cricket team beat South Africa in the fourth ODI at Wanderers of the ongoing series against South Africa. It was a must win game for Pakistan with the visitors 2-1 behind in the five- match series. Malik was the captain in today's match after permanent Pakistani skipper Sarfraz Ahmed has been banned for for four matches for racist comment towards South Africa's Andile Phehlukwayo in the earlier ODI match.