A win would not only put Djokovic on the hunt for a 20th Grand Slam title, but also on course for seventh straight win over his 22-year old opponent. 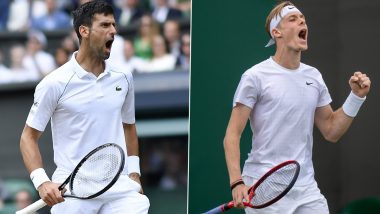 Aiming for a record-equalling 20th Grand Slam, Novak Djokovic would lock horns with Denis Shapovalov in the men's singles semi-finals on Friday, July 9. That match would be played at the Centre Court and is scheduled to commence at 08:00 PM IST (Indian Standard Time). Djokovic, coming on the back of a French Open title win, would walk into this contest as the overwhelming favourite. The Serbian has been in top form all-throughout the competition, having dropped just one set so far. A win would not only put Djokovic on the hunt for a 20th Grand Slam title, but also on course for seventh straight win over his 22-year old opponent. As a matter of fact, with the remaining competition left in the tournament, it wouldn't be wrong to fancy Djokovic winning it. But with how things turned out in the quarter-final match between Roger Federer, it can be argued that although there are favourites, no one can be ruled out. Roger Federer Talks About Retirement After Shocking Exit from Wimbledon 2021, Says ‘The Goal is to Play’ (Watch Video)

And Shapovalov won't make things easy for the 34-year old Serbian. Playing his first semi-final, Shapovalov, who has been in superb form throughout the competition, is expected to put up a fight.

What is the Date, Time, Schedule and Venue of Wimbledon 2021 Novak Djokovic vs Denis Shapovalov Men's Singles Round of Semi-Final?

Novak Djokovic vs Denis Shapovalov semi-final in Wimbledon 2021 will take place on July 09, 2021 (Thursday). The match will be played on Centre Court and has a tentative start time of 08:00 pm IST (Indian Standard Time).

Where to Watch the Live Telecast Wimbledon 2021  Novak Djokovic vs Denis Shapovalov  Men's Singles Semi-Final Match? Which TV Channel Will Broadcast it LIVE in India?

Where to Watch the Live Streaming of  Novak Djokovic vs Denis Shapovalov  Men's Semi-Final Match Online in India?

(The above story first appeared on LatestLY on Jul 09, 2021 04:08 PM IST. For more news and updates on politics, world, sports, entertainment and lifestyle, log on to our website latestly.com).