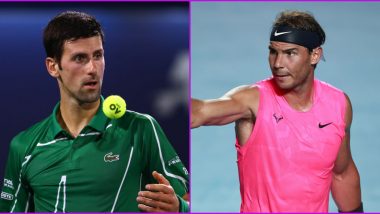 Rafael Nadal and Novak Djokovic have joined the #BlackOutTuesday campaign in solidarity with the protestors in the United States following the killing of George Floyd. The tennis starts joined other players to support the #BlackOutTuesday movement. Both Nadal and Djokovic posted black images in support of the black community. Roger Federer, Maria Sharapova and Dominic Thiem also shared a similar posts on his social media accounts. Tennis players Naomi Osaka, Coco Gaiffu, and Frances Tiafoe are the ones leading the campaign. Roger Federer Posts Black Image on Twitter in Solidarity With Protests in America.

Floyd, 47, was killed recently by a police officer who pressed his knee into his neck. Footage of Floyd lying down on the ground and saying "Please, I can't breathe” have gone viral. The 47-year-old African American subsequently succumbed due to breathlessness. Who Was George Floyd? Why Was He Detained? Here's Why.

(The above story first appeared on LatestLY on Jun 03, 2020 12:08 PM IST. For more news and updates on politics, world, sports, entertainment and lifestyle, log on to our website latestly.com).