Former champions Simona Halep and Petra Kvitova won their first round matches easily while American youngster Coco Gauff survived a scare at the Wimbledon on a day on which No.4 seed Paula Badosa returned to winning ways. 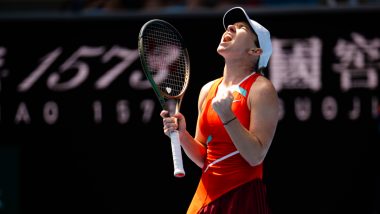 London, June 28 : Former champions Simona Halep and Petra Kvitova won their first round matches easily while American youngster Coco Gauff survived a scare at the Wimbledon on a day on which No.4 seed Paula Badosa returned to winning ways. Halep, who played majestic tennis to overcome Serena Williams and win the 2019 title, could not defend her title due to the Covid-19 pandemic. She also missed the 2021 edition due to an injury. On Tuesday, came through a tough first-round encounter against two-time quarterfinalist Karolina Muchova, the former World No.1, seeded No.16 wrapped up a comfortable 6-3, 6-2 victory in 65 minutes and reach Round 2. Wimbledon 2022: Nick Kyrgios Pushed All the Way by Wild Card Paul Jubb in a Five-Set Thriller.

Halep broke her opponent's serve four times but never faced a break point herself on her 10th appearance on the hallowed grass courts of SW19. While Halep was "emotional" before this match,- she played with poise and confidence from the off and never relented. "It feels great to be back. I have great memories from 2019," said the former world No.1, who had prepared for Wimbledon by reaching the semifinals of two grass-court tournaments, in Birmingham and Bad Homburg. In the absence of last season's winner, Ashleigh Barty, who retired earlier this season, Halep is the closest to a defending champion in the ladies' singles draw.

Two-time Wimbledon winner Kvitova avoided a first-round loss for the second straight year with a three-set comeback against Italy's Jasmine Paolini. After dropping the first set in less than a half-hour, Kvitova bounced back for a 2-6, 6-4, 6-2 win in 1 hour, 42 minutes. Kvitova broke Paolini when the Italian served at 3-3 in the second set, and never trailed from then on. The 2011 and 2014 Wimbledon champion was bedevilled by the breeze for the opening set of her clash but picked up her game in time to progress to the second round. After losing her opener at Eastbourne last week, Paula Badosa needed less than an hour to win her first grass-court match of the season. The fourth-seeded Spaniard dispatched American qualifier, Louisa Chirico in 56 minutes, 6-2, 6-1.

Badosa broke serve five times and made fewer unforced errors than Chirico, who racked up 24 in 15 games. After the match, Badosa told reporters she was pleased with her ability to adapt to windy conditions on Court 12. "I'm really happy that I could have a good win here," she said. Badosa's next opponent is Romania's Irina Bara, ranked No.122. In her Wimbledon main draw debut after losing in qualifying four previous times, Bara was a 6-2, 6-4 winner against France's Chloe Paquet in Round 1. Gauff too had to survive some tough moments in her three-set win against world No.54 Elena-Gabriela Ruse, it took all Gauff's resourcefulness to win through 2-6, 6-3, 7-5 on No.2 Court. "Elena played an amazing match," Gauff was quoted as saying by the official website. "Both of us gave our hearts. It was an electrifying match and I want to congratulate her on her tennis and her fight. I honestly like this court. It's pretty loud but also intimate - you can hear every cheer and every gasp. Serena Williams Out of Wimbledon 2022, Loses to Harmony Tan in a Three-Hour Contest.

"First rounds are always the most nerve-wracking. In the middle of the first set I was freaking out a bit but I thought the worst that can happen is that I lose - it's not the end of the world. And that's when I started to play better." No.12 seed Jelena Ostapenko opened her campaign with a 6-4, 6-4 defeat of Oceane Dodin in 71 minutes. She was joined by Aliz Cornet, whose 62nd consecutive appearances in a Grand Slam main draw equalled Ai Sugiyama's all-time record and who celebrated that feat by upsetting No.27 seed Yulia Putintseva 6-3, 7-6(5).

Ostapenko, a semifinalist here in 2018 and fresh off a run to the Eastbourne final last week, had already defeated Dodin this year in the first round of Doha 6-4, 6-2. That was in the midst of a stellar Middle East swing for the Latvian, and she was able to reprise that form in a clash of no-holds-barred aggressive hitting from both players. Though No.85-ranked Dodin's power was as breathtaking as Ostapenko's at times - not least the consecutive return winners with which she captured one break of serve - it was the former Roland Garros champion who dominated every category, according to a report on the WTA Tour website. Ostapenko found 29 winners to the Frenchwoman's 10, won 70% of her first-serve points to Dodin's 63%, and 50% of her second-serve points to Dodin's 38%. Nine aces also helped Ostapenko's cause considerably.

(The above story first appeared on LatestLY on Jun 29, 2022 10:56 AM IST. For more news and updates on politics, world, sports, entertainment and lifestyle, log on to our website latestly.com).