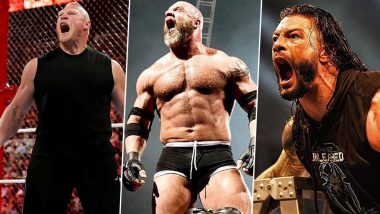 We witnessed an enthralling episode of Monday Night Raw on Aug 10, 2020, at Performance Center in Orlando, Florida. We saw the contract signing between Dominik Mysterio and Seth Rollins for their match at SummerSlam 2020. However, after the match, we saw the Monday Night Messiah brutally assault Dominik by striking Rey Mysterio's son with kendo sticks. On this past episode of Raw, we also witnessed Asuka defeat Bayley to earn Raw Women's Championship title match at SummerSlam 2020. Meanwhile, you have arrived at the right page if you are looking out for five interesting updates from WWE. WWE Raw Aug 10, 2020 Results and Highlights: Randy Orton Hits Ric Flair With Punt Kick, Seth Rollins Assaults Dominik Mysterio After The Contract Signing For Their Match at SummerSlam 2020 (View Pics)

Former WWE Universal Champion Goldberg took a dig at Roman Reigns while speaking on American Monster Production YouTube channel. Goldberg called The Big Dog 'A joke' during the interview. Ahead of their WrestleMania 36 match, Roman Reigns had taken a jibe at Goldberg's habit of banging his head on a door ahead of matches. When WWE Hall of Famer was asked about this, he said that he used to headbutt the door to make his character look more violent. Roman Reigns was replaced by Braun Strowman to fight for Universal Championship at WrestleMania 36, as The Big Dog has taken a break from WWE considering the ongoing coronavirus pandemic.

2. Real Reason Why Ric Flair Was Attacked By Randy Orton

Ric Flair returned to WWE as the manager of Randy Orton and he was expected to accompany Randy Orton for his match against Drew McIntyre at SummerSlam 2020. However, the WWE universe was shocked to see The Viper turn on his own mentor and old friend. Randy Orton hit the two time Hall of Famer with a punt kick and also insulted the legend by saying that he no longer needed him as Flair was a liability to him. As per the report from WrestlingNews.co, Ric Flair was attacked this past week on Raw as his run with WWE is over and the company feels that there is no need to involve The Nature Boy in the feud between McIntyre and Orton. Hulk Hogan Birthday Special: From Being a Professional Musician to Once Getting Arrested, Here Are Seven Interesting Facts About WWE Hall of Famer.

3. Brock Lesnar to Possibly Make His Return Through Raw Underground

The Beast Incarnate is absent from WWE Raw since he lost his WWE title to Drew McIntyre at WrestleMania 36. There were speculation about Brock Lesnar return at SummerSlam 2020, but, that doesn't look possible looking at the current storyline. However, as per wrestling journalist Tom Colohue and Korey Gunz discussion on Dropkick DiSKussions podcast,  there is a high possibility of Brock Lesnar being brought back for RAW Underground. Bobby Lashley from The Hurt Business faction has already entered on Raw Underground. Lesnar might make a return and challenge The All Mighty for a match at Raw Underground. If this happens, it will indeed be a dream come true for wrestling fans. Former WWE Superstar James Harris ‘Kamala’ Passes Away at 70, The Wrestling Legend Dies Due to COVID-19.

WWE commentator Byron Saxton recently spoke to Corey Graves on his 'After The Bell' podcast where he revealed that he has trained along with current Raw Women's Champion Sasha Banks at the developmental centre when she was young. Saxton revealed that Banks was quite shy in her early days which many perceived it as her 'ego' problem. However, Byron also mentioned that if you see Banks now, she is totally a different girl from what she was during her training days.

5. Charlotte Flair Was Ignored by The Locker Room

Byron Saxton in his recent interview with Corey Graves on his podcast also mentioned about Charlotte Flair, where he said that The Queen was ignored and no other women wrestler or diva spoke to her. WWE divas in the locker room thought that Charlotte has been given an opportunity due to nepotism, as she is Ric Flair's daughter. However, Saxton mentioned that Charlotte Flair has already proved her mettle and has proved WWE Universe that she is one of the best female wrestlers of all time.

Charlotte Flair is currently recovering from surgery right now and we expect her to return soon. As per the storyline, she was injured on Raw a few weeks back by due to an attack by Nia Jax. WWE fans will now look forward to the NXT episode. Stay tuned with LatestLY for more details and updates from WWE.

(The above story first appeared on LatestLY on Aug 12, 2020 09:01 AM IST. For more news and updates on politics, world, sports, entertainment and lifestyle, log on to our website latestly.com).