Hulk Hogan Birthday Special: From Being a Professional Musician to Once Getting Arrested, Here Are Seven Interesting Facts About WWE Hall of Famer 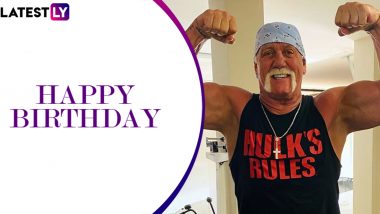 Hulk Hogan turns 67 years old on Aug 11, 2020. Hulk Hogan has played an integral part in making WWE what it stands today. The WWE legend has fans from around the world, which even include people who don't watch WWE. Hulk Hogan has his own unique style and personality, especially the wrestler's moustachioed and huge biceps. Hogan's fans are offered referred to as Hulkamaniac. On the occasion of Hulk Hogan's birthday, let us take a look at some interesting facts of WWE Hall of Famer. James Harris' Passion for Entertaining Crowd Was Second to None, Says Hulk Hogan.

Terry Eugene Bollea, the real name of Hulk Hogan was born in Augusta, Georgia, on August 11, 1953, the son of construction foreman Pietro 'Peter' Bollea of Italian descent and homemaker and dance teacher Ruth V. As a child Hogan loved playing baseball. During his childhood days, he was a pitcher in Little League Baseball. Hogan started his wrestling career in the year 1979 and he was discovered by Vince McMahon Sr. Now let us take at some interesting facts about Hulk Hogan. Chris Hemsworth Reveals Hulk Hogan Biopic Script is ‘Deep in Development.'

1. Hulk Hogan was always larger than average people as he weighed 190 pounds and had a height of six feet when he was just 12 years old.

2. Hulk Hogan got trained by legendary wrestler Hiro Matsuda, where his training was so intense that he even broke his leg.

3. Hulk Hogan was a professional musician prior to taking wrestling as his career. He was even member of the famous band known as Ruckus.

4. Hulk Hogan played the small cameo in Rocky III as Thunderlips, where he was thrown out of the ring by Sylvester Stallone. Hogan and Stallone are good friends in real life.

5. Hulk Hogan is the only wrestler to feature on the cover of Sports Illustrated. The issue came out way back on April 29, 1985.

6. Hulk Hogan was once arrested in New Jersey when he was found to possess a firearm. According to a report from The Los Angeles Times, the wrestler ended up entering a pretrial intervention program where he served six months’ probation and his felony charge was dropped.

7. Hulk Hogan has had several surgeries throughout his wrestling career which include hip, knee and back. Due to this, Hulk Hogan has lost three inches from his height.

Hulk Hogan is the only wrestler to have won Royal Rumble consecutively in the year 1990 and 1991. Hogan was reinstated to WWE Hall of Fame in the year 2018, after serving three years of suspension due to his racist comment. Hulk Hogan was last seen at WWE Crown Jewel 2019 as the mentor of Team Hogan which defeated Team Flair.

(The above story first appeared on LatestLY on Aug 11, 2020 08:00 AM IST. For more news and updates on politics, world, sports, entertainment and lifestyle, log on to our website latestly.com).