WWE Raw Aug 10, 2020 episode offered fans with action-packed drama and full entertainment. We are aware of the fact that Randy Orton is the Legend Killer, however, many fans in their dream would have never imagined that he would attack his mentor and old friend Ric Flair. 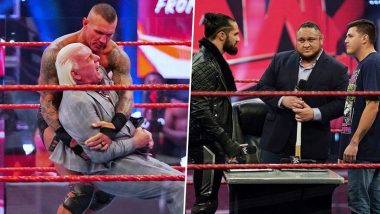 WWE Raw Aug 10, 2020 episode offered fans with action-packed drama and full entertainment. We are aware of the fact that Randy Orton is the Legend Killer, however, many fans in their dream would have never imagined that he would attack his mentor and old friend Ric Flair. The two times Hall of Famer was down and out after he was hit with a punt kick by Randy Orton. Apart from this, we saw Seth Rollins assault Dominik Mysterio after signing the contract for their match at SummerSlam 2020. Meanwhile, you have arrived at the right platform, if you are looking for WWE Raw results and highlights. WWE Raw Aug 3, 2020 Results and Highlights: Seth Rollins to Face Dominik Mysterio at SummerSlam; Apollo Crews Defeats MVP to Retain United States Title.

Randy Orton after defeating Kevin Owens shocked WWE universe by attacking Ric Flair. Orton said that Flair is a liability to him and he is no longer the same guy he looked upon once. After hitting the punt kick, The Viper was looking to damage the legendary wrestler furthermore, however, WWE Champion Drew McIntyre entered that time and forced him to run out of that area. It will indeed be an interesting battle for WWE Championship at SummerSlam 2020 between Randy Orton and Drew McIntyre. Hulk Hogan Birthday Special: From Being a Professional Musician to Once Getting Arrested, Here Are Seven Interesting Facts About WWE Hall of Famer.

In the other segment of Raw, we saw Asuka defeat Bayley to earn Raw Women's Championship title match against Sasha Banks at SummerSlam 2020. Shayna Baszler entered Raw Underground in which she took out all her three opponent. We saw some brutal action from Dabba-Kato on Raw Underground where he took out his opponent by grabbing their groin and then delivering a knockout punch. Shelton Benjamin defeated the United States Champion Apollo Crews after the champion interfered in the VIP's lounge. R-Truth became 24/7 Champion by defeating Akira Tozawa. Former WWE Superstar James Harris ‘Kamala’ Passes Away at 70, The Wrestling Legend Dies Due to COVID-19.

@randyorton has turned on @ricflairnatureboy. Thankfully @dmcintyrewwe was able to step in before things went even further... #WWERaw

Retribution doesn't seem to take a halt on their rampage as they damaged the building of WWE Performance Center on this week's episode of Raw. The masked faction had also attacked developmental talent in the audience this past week on SmackDown. Fans will look forward to knowing about the mystery of Retribution in coming weeks and also how the WWE official take steps to prevent further damage.

(The above story first appeared on LatestLY on Aug 11, 2020 11:54 AM IST. For more news and updates on politics, world, sports, entertainment and lifestyle, log on to our website latestly.com).