The top Chinese official also called for improving response to the changing situation around the pandemic, stressing the importance of optimizing the country's policy on disease prevention, testing and quarantine measures, as well as immunization of the whole population. 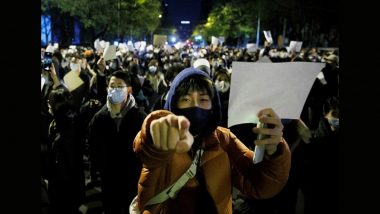 "As the pathogenicity of the Omicron virus weakens, more people are vaccinated and experience in containing the virus is accumulated, the country is facing a new situation and new tasks in epidemic prevention and control," Sun said on Wednesday in a statement published by China's State Council.

The top Chinese official also called for improving response to the changing situation around the pandemic, stressing the importance of optimizing the country's policy on disease prevention, testing and quarantine measures, as well as immunization of the whole population. At the same time, Sun noted that Chinese authorities had always "put people's health and safety first" and tackled the pandemic with "a consistent strategy and flexible measures." Bill Clinton Tests COVID-19 Positive; Former US President Urges People To Get Vaccinated.

China has adhered to a zero-tolerance policy toward COVID-19 cases almost from the very beginning of the pandemic. Chinese epidemiological control is one of the strictest in the world. Over the weekend, thousands of people in Shanghai, China's biggest city and financial centre, began publicly protesting the government's strict Covid-19 measures and denouncing the Chinese Communist Party's authoritarian rule, according to Human Rights Watch (HRW).

University students across the country gathered on their campuses to demonstrate, and that night, hundreds of people in Wuhan, where Covid-19 originated, Chengdu, Beijing, and other large cities, took to the streets.

The protest in Shanghai was in response to a November 24 fire at an apartment building in Urumqi, the capital of China's northwest Xinjiang region, in which at least 10 people were killed.

China has faced widespread criticism over the latest crack-down on demonstrations held against stringent covid policies deployed by the government since the start of the pandemic. "People across China are taking extraordinary risks to demand their human rights," said Yaqiu Wang, senior China researcher at Human Rights Watch. "The Chinese authorities should not suppress the protests but instead allow everyone to peacefully express their views."