An unwavering believer of the above-mentioned quote, Pratik Kale is a visionary entrepreneur and digital marketer par excellence who has been instrumental in founding the Women Intellectual Network and Psychogyi International. 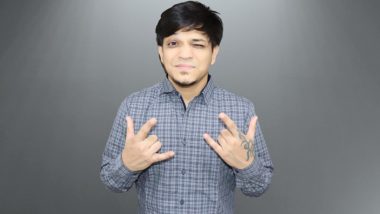 An unwavering believer of the above-mentioned quote, Pratik Kale is a visionary entrepreneur and digital marketer par excellence who has been instrumental in founding the Women Intellectual Network and Psychogyi International.

Having excelled at various fronts at the age of 28 while achieving the tag of being a successful entrepreneur, today Pratik has built an empire for himself but this success did not come overnight, there is a long, weary story which Pratik sustained with the affirmation that 'I m worth more than this'.

Pratik Kale has been a hustler who never gave up on following what his heart said, he further elaborates on this, “All of us are capable of turning our dreams to reality with courage, it is one that separates a non achiever from an achiever, I was fortunate to realize this early and not conform to what the society asks me to do, being a disruptor certainly puts you in a lot of pressure but it makes you equipped to see overarching success with persistence, I left a reputed engineering college which my parents wanted me to get into after paying a huge amount of donation which I dropped out from because I lost interest, I firmly believe that one must love what they want to repeat throughout their lives to sustain and develop in the field, propelled by which I committed my next 2 years to dancing and travelling abroad for the same".

"This passion of dancing drove me to open two studios in Bangalore, post which I held faith on my instincts and moved to Pune for understanding the nuances of human psychology and persuasion techniques" adds Pratik on his breathtakingly adventurous choices in life.

The drive to scale his professional life upwards motivated him to lead as an entrepreneur, Pratik took a leap of faith again and left his cushy job to become an entrepreneur, the initial days of starting his own venture were extremely challenging and demotivating for the young visionary but he held his hopes tight.

He sustained himself from working odds jobs while investing everything on his venture and after  2 testing years, his perseverance enabled his firm to work with his dream companies such as Mercedes Benz, Godrej, Lodha Group, Peter England, Super Sox, JW Marriott, and few other international brands.

Taking his insightful philosophies to each human is the purpose of his podcast and his venture ‘Psychogyi International’ which focuses on strategy and planning based on neuroscience and psychology for businesses.

With his strategies and affirmations that have transformed him from a being an engineering dropout to an ace entrepreneur who has found some breakthrough ventures, Pratik Kale is an inspirational figure who has given a new dimension to dreams and having courage in life.