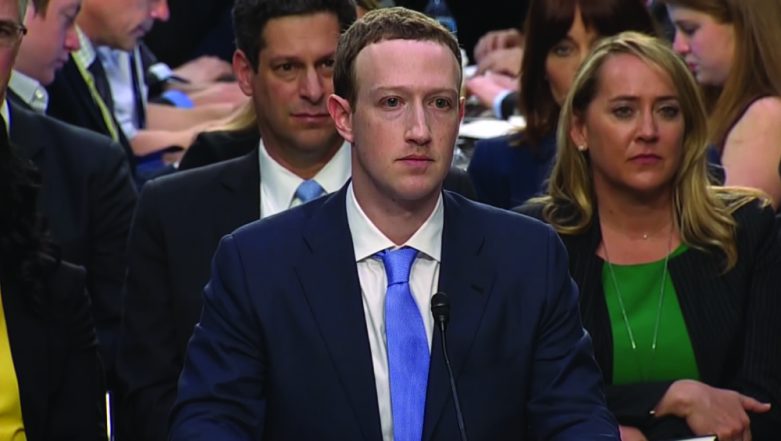 San Francisco, May 12: Facebook CEO Mark Zuckerberg has rejected the call for breaking up his company, saying the size of Facebook was actually a benefit to its users and for the security of the democratic process. In an interview with French broadcaster France 2, Zuckerberg dismissed the claim made by his long-time friend and Facebook co-founder Chris Hughes that it is time to break up Facebook as Zuckerberg has yielded "unchecked power and influence" far beyond that of anyone else in the private sector or in the government.

"When I read what he wrote, my main reaction was that what he's proposing that we do isn't going to do anything to help solve those issues. "So I think that if what you care about is democracy and elections, then you want a company like us to be able to invest billions of dollars per year like we are in building up really advanced tools to fight election interference," Zuckerberg told France 2 while in Paris to meet with French President Emmanuel Macron. Mark Zuckerberg-Owned Facebook Acquires Virtual Search Start-Up to Grow Its Artificial Intelligence.

In an opinion piece in The New York Times on Thursday, Hughes said the government must hold Mark (Zuckerberg) accountable. "Mark's personal reputation and the reputation of Facebook have taken a nose-dive," wrote Hughes, who during his freshman year at Harvard University in 2002 was recruited by Zuckerberg for Facebook. Zuckerberg said that Facebook's budget for safety this year is bigger than the whole revenue of the company when it went public earlier this decade.

"A lot of that is because we've been able to build a successful business that can now support that. You know, we invest more in safety than anyone in social media," reported TechCrunch, quoting Zuckerberg. Hughes wrote that Zuckerberg has surrounded himself with a team that reinforces his beliefs instead of challenging them. "Mark is a good, kind person. But I'm angry that his focus on growth led him to sacrifice security and civility for clicks," he wrote.

In a separate opinion piece in the NYT on Sunday, Nick Clegg, who is the Vice President for global affairs and communications in Facebook, said that success should not be penalised. "Facebook shouldn't be broken up but it does need to be held to account," Clegg wrote. "Hughes maintains that lawmakers merely marvel at Facebook's explosive growth and have overlooked their own responsibility to protect the public through more competition.

"This argument holds dangerous implications for the American technology sector, the strongest pillar of the economy. And it reveals misunderstandings of Facebook and the central purpose of antitrust law," Clegg argued. Embroiled in users' data scandals, Facebook is set to create new privacy positions within the company that would include a committee, and external evaluator and a Chief Compliance Officer.

Facebook has already kept aside $3 billion anticipating a record fine coming from the US Federal Trade Commission (FTC) related to the Cambridge Analytica data scandal which involved 87 million users. The Facebook case is being looked at as a measure of the Donald Trump administration's willingness to regulate US tech companies.