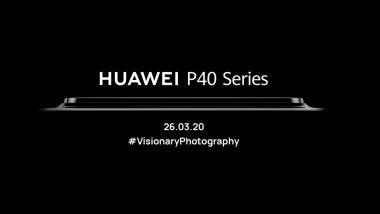 Huawei, the leading Chinese smartphone giant is all set to launch the much-awaited Huawei P40 series tomorrow in China. The flagship P40 range will comprise of Huawei P40, P40 Pro, and P40 Pro Premium Edition. To be powered by Kirin 990 5G chipset, the Huawei P40 and Huawei P40 Pro prices have been leaked online ahead of launch. The report mentions that the Huawei P40 and Huawei P40 Pro smartphones will get a starting price of EUR 799 and EUR 999, respectively. The launch event will be an online event instead of an offline one, which will be streamed via official social media platforms and the official website. Huawei Kirin 820 Chipset To Be Unveiled Soon For Its Mid-range Devices: Report

On the specifications front, the Huawei P40 Pro will sports a 6.58-inch FHD+ AMOLED display with a resolution of 1,200x2,640 pixels. The screen is also expected to feature a 90Hz high refresh rate. Additionally, the phone will get a pill-shaped hole-punch camera cutout housing a dual-camera setup with a 32MP camera and a depth sensor.

The rear camera setup on the Huawei P40 Pro is likely to employ two RYYB sensors, comprising 50MP UltraVision camera for photos, whereas the second RYYB sensor will be a 40MP secondary camera for videos. The 50MP primary snapper will also feature Optical Image Stabilisation (OIS) and an Octa Phase Detection system. It will also sport up to 50x SuperSensing zoom without the loss of quality. The phone will also be packed with a 12MP snapper along with a 3D depth sensor and a macro lens.

Are you ready to experience #VisionaryPhotography? 📸

Join us on March 26th and be one of the first to witness the future of photography #HUAWEIP40 pic.twitter.com/OvlTzTOMB3

If the market reports are to be believed, the P40 Pro will be offered with 8GB of RAM with two storage options - 128GB and 256GB. The phone will be backed with a 4,200mAh battery with 40W fast charging support along with wireless charging. The Huawei P40 Pro will sport IP68 dust and water resistance.

On the other hand, the Huawei P40 smartphone will sport a 6.1-inch display with pill-shaped hole-punch cutout display housing the front camera. The smartphone will be equipped with a 50MP primary camera with RYYB sensor with a 16MP ultra-wide-angle camera, and Two 8MP lenses.

The Huawei P40 will be fuelled by a smaller 3,800mAh battery with 22.5W fast charging. Both the smartphones will come with an ASOP version of Android 10 offering Huawei App Gallery as the primary app store, instead of the Google Play Store. The Huawei P40 and the Huawei P40 Pro will be offered in four colours - silver, golden, white and black.

(The above story first appeared on LatestLY on Mar 25, 2020 11:18 PM IST. For more news and updates on politics, world, sports, entertainment and lifestyle, log on to our website latestly.com).